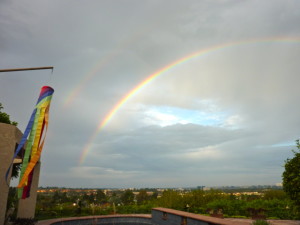 “When the sunlight strikes raindrops in the air, they act like a prism and form a rainbow. The rainbow is a division of white light into many beautiful colors. These take the shape of a long round arch, with its path high above, and its two ends apparently beyond the horizon. There is, according to legend, a boiling pot of gold at one end. People look, but no one ever finds it. When a man looks for something beyond his reach, his friends say he is looking for the pot of gold at the end of the rainbow.”

–The Rainbow Passage was developed by Bell Laboratories personnel as the company worked on the telephone receiver. It is a standard oral reading passage used by speech-language pathologists because all 40 phonemes of American English are  utilized in proportion to their representation in everyday conversation, a determination derived before computers. My source is The Voice and Articulation Drill Book, Grant Fairbanks, 1927, a book that I purchased in 1967 for $2.95. In the symmetry of serendipity I’ve been a speech-language pathologist for 40 years.