Living Life as a Miracle: Halloween 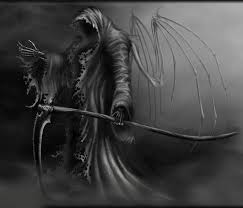 The Grim Reaper was grim: he’d forgotten his scythe and here we were – all the way across town, past 20-30 stoplights, most of which had glowered red, holding us hostage for 1

1/2 minutes each. His grandly planned party entrance was despoiled.

Such is traffic in Irvine, a topic of great angst and chagrin in our home. The noise of political theater has ratcheted up the topic as I write in 2014. It’s a contention between mayoral candidates.

But this is a story of a past Halloween, a survived offense – and all those since, living life as a miracle, with the exception of sailing freely through Irvine street intersections. It’s important to acknowledge miracles when you’re costumed as a witch on a dark suburban street, waiting to meet up with the Grim Reaper.

Here’s the lowdown, the highlights – you pick the phrase you prefer. I’m gonna give just the facts, layered with my conviction of miracle, filtered though history’s lens.

Larry was aggravated at himself, but didn’t want me to miss out on any party time with friends. Besides, we’d planned to enter separately to preserve his masked identity – so he dropped me at the curb and zoomed away, jaw set.

After the tire squeal faded, there was no sound, the neighborhood was eerily silent. I turned from the street and opened a knee-high gate, feeling somewhat like an interloper. No pumping party music, no spark to the night. My black boots feigned confidence as I walked the cobblestone path of the minimalist side yard, wondering about the lack of holiday decor. The party hostess was a mortuary owner, famously thorough in the macabre.

Midway on the walk, golden light shone from a large picture window where, like a Macy’s storefront window, a tableau of suburban conviviality played out. Two middle-aged couples were seated at a round table, chatting and laughing between wine sips.

Holy crap – I was a ‘peeping Tom’ witch! This gave me a fright! I instinctively tiptoed back to the sidewalk, hoping that the ever-vigilant Irvine police weren’t on patrol. Thank goodness, my deodorant was working…

Back out on the sidewalk, I clomped past two houses to the street corner, pinching my eyes to solidify the street sign letters obscured by branches of trees. Leaves swayed in the breeze, dappling the sign, and atmospherically heightening my alarm. The ‘telltale heart’ thumped under my black-out garb.

This was not the correct street! Thank goodness a black cat hadn’t crossed my path – nor was there a menacing guard dog to give away my trespass!

Back and forth between the two blocks I paced, glad that I was dressed in black in an area with little ambient light and auto traffic. I didn’t mind that I couldn’t glimpse heaven’s stars: thank heaven for cloud cover.

There were no other pedestrians…I was glad that it wasn’t Halloween, so that I wouldn’t alarm true trick-or-treaters. A lone witch wouldn’t portent good to a costumed child. No outlandish alien radar needed for that! A witch could steal candy, sweeping it away with her broom.

This witch wished she had a wrist watch, something to note the time. Larry’s trek back-and-forth could be an hour – or less – and I needed to be in the right place at the right time. If I wasn’t, I would be lost – all would be lost, a crime of time and place, a blonde witch’s memory glitch.

Glory be, life is a miracle when you fervently hope, wish, and pray. Here came my husband’s SUV, sparkling white as the moon peeping from the cloud cover above. My pacing had placed me at the corner of the street where he’d dropped me off, so that we could scurry one street over to the correct party site, which I’d had plenty of time to ascertain.

The grand entrance was grand – the Grim Reaper ruled the night, never revealing that he was my spouse – until after he’d gained the best costume prize!