Life as a Miracle: Hole in the Earth 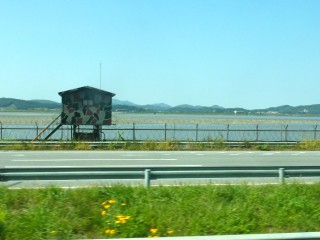 I declined to crawl the channel under the Great Pyramid of Giza. We forsook the catacombs of Rome.

I am seriously claustrophobic, as well as mildly afraid of heights.

So it’s no wonder that we have walk-in closets in our single story home. No cabinets big enough for a body, no corners for time-out, no stair rails, no loft.

Yet, I agreed to travel into a DMZ tunnel to touch its window into North Korea. 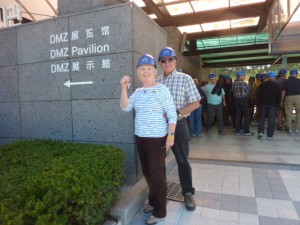 Yes, the expedition, for which we paid dearly as a side trip to our cruise ship’s Seoul stay, would allow us to trek Tunnel #3, a 1/2 mile span.

After Korea was split into North and South, the North dynamited tunnels that a single file squadron could utilize to attack the South. The total number of tunnels is unknown. Adventure! I was going in…

Tunnel #3: dynamited granite all around, about the space of Leonardo’s famous picture of a spread-eagled man.

However, the tunnel had been undetectably dug a mile under the surface. A mile, down, down, down.

I hadn’t considered the consequences, the darkness into which we’d descend, literally and figuratively.

Yikes, the hard, harsh reality. I was going under the Earth. I’d be a mole, a tunnel rat – had I signed up for this? Hmm-n.

Miracle of miracles, Larry and I were seated in the final seat, which would the driver’s on return, up the incline from the dungeon-like space. It was a single track, no cul-de-sac, no turn-around. Too tightly carved.

Our seats faced backward from the rest of the 50+ tour group. Our view was not descent into musty dirt and rock, but of the 6 foot diameter entrance. We saw blue sky and sunshine, diminishing to the size of a pin, as the monorail descended. Less fright due to the wide open sight; the secure familiar, not the unknown.

I imagined myself as Alice in Wonderland, heading down the rabbit hole. Larry was not the White Rabbit and we were not late, late, late. He was holding my hand.

At the bottom, the end of the several-minute ride, we got out of the tram and walked and trudged and walked in one line, a bit hunched with our helmeted heads clunking the tunnel ceiling many times. No slippage due to a length of rubber floor mats.

The walls seeped, but emitted no smell. The earth didn’t heave, buckle, or swell. There wasn’t much talk among the trekkers, the others on our tour group. Some were South Koreans, seeking closure to a sad fact, their dispatriated-by-force countrymen on the other side. Some adults brought their children, so lessons learned wouldn’t be lost.

Some members of the tour group were children of the ’50s like us, when the war – and this tunnel – went down. We each had our moment of zen, considering the possibilities, yet not.

At the end, there was nothing to see through/into the DMZ, no clues except the blank concrete on their side. We didn’t see a North Korean soldier guarding the subterranean window. Perhaps one couldn’t stand the sight of freedom that he couldn’t have.

After our silent trip back up the diagonal shaft, in the slow, slow, slow monorail, we were shuffled toward a souvenir shop. We didn’t buy hats, flags, or tee-shirts. No hokey plaques made in Japan, Korea, or China. My survival via deep-breathing, the unexpected trip of a lifetime was its own reward. 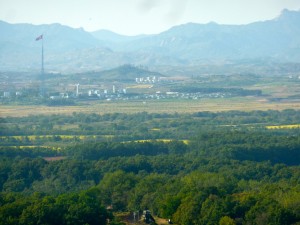 Our tour bus ground slowly up a windblown hill, the land on each side fenced off with the unmistakable, universal sign of nuclear danger posted all along. At the top of the hill we climbed a large concrete bunker-like tower and looked into North Korea. We took photos. We reflected. We waved.

But the only return wave was the whip of the wind across the military outpost’s flag. Even the air was lonely, the sunshine defeated by haze. The hush was nearly unbearable, as if Communist suppression lurked.

Well, it did, as a matter of fact. 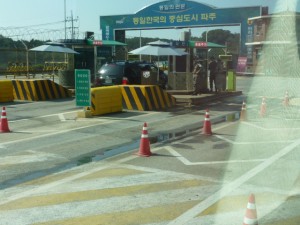 Here’s a final photo, to cement your impression of me as a brazen brave girl. Our bus stopped at this checkpoint so we could drive across the border on a bridge span built with great hope by Mr. Mitsubishi, the motorcar magnate. A North Korean soldier boarded the bus and scrutinized each person’s passport, then allowed us to drive across.

When we returned from our journey on the 1/4 span, the thin dude again boarded the bus. Not to look at our passports again, but to count, to assure that no one had jumped off. As if.

We were forbidden to take photos of the guards and their shack. Ha! Ain’t it grand that an iPhone doesn’t look like a camera and can be palmed in a hand.

Ain’t it grand to be a citizen of freedom land, with soldiers whose valor we’ll commemorate soon. Memorial Day has great meaning for me. How about you?