the Book of Daniel 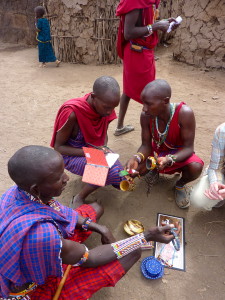 I took a blank paged book to Africa, to write in everyday impressions, facts, experiences. It’s a habit that we gleaned from my parents, the intrepid travelers we impersonate. We noticed that they recalled each of their trips in vibrant details, complete with facts and opinions. Whereas we had overall impressions of architecture, paintings and people, reinforced by books hastily read on the plane overseas and tour guide travelogue at the sites, their impressions seemed to be 3D, standing alert in their 65-80 year old brains. Our memories were hazy, despite our nimble IQs, ages, and knees.

I had a blank book in Africa and journaled in it daily. I was a bit compulsive…but I prefer the words attentive and focused. Consistent. The handwriting wiggles when the bumps lurched us in the safari vehicles and often there are memory gaps, especially for esoteric bird names which were not our expectations. It’s an extraordinary chronicle of ‘The Trip of a Lifetime”, the term that we twenty-six Tauck safari trekkers agreed was appropriate.

You see, in our prior foreign excursions, we’d often asked “What was your favorite trip?” to establish rapport with people we met. Every person we queried over the years had said “Africa”.

Now we agreed. Africa allowed us to revel in wild nature, a privilege granted by the hundreds and hundreds of animals, to watch them at length in their graceful daily living. We saw elephants, two kinds of rhinos, giraffes, lions, leopards, hippos, chimpanzees, water buffalos, wilde beasts, buzzards, hyenas, wart hogs, dick dicks, and several types of gazelles and antelopes. We saw zebras, vervet monkeys, baboons, topis, cheetahs, porcupines, deer, termites, and tsetse flies. There were babies and infants bouncing among herds of each species. Every animal moved poli-poli, slowly slowly, to a drum cadence that we couldn’t hear, munching peacefully in an open air cafeteria.

We followed the route of the Great Migration, a yearly circle of travel that follows the rains that grow the grasses for the animals and birds to eat and hide in, the scenery and scenario of ‘The Lion King’. The natives even said, “Hakuna Mahtata” and “Jambo” in greeting. We saw plains, acacia trees, grassland savannahs, an extinct volcano, and several mountains rising high, including the famous Killamanjaro. We soared in a hot air balloon to view the terrain of the Masai Mara. We saw curvaceous and muddy rivers. We experienced Zen, the apparently normal cycle of life in East Africa.When we visited a Masai village, complete with visits inside their round mud huts, fire-starting with twigs, and recitation and songs by the village’s children, a journal page was re-purposed. The picture tells its story, but there’s more.

You see, I’d taken twenty dollars in my pants pocket and my husband had no wallet. We had not come to East Africa to shop, but the opportunity to purchase Masai goods was a forced choice, so I prepared to the extent that I ever shop. Not shopping much at home affords us trips to Africa and elsewhere.

But then ‘Masai Fever’ overtook Larry and me…soon our tally for the goods we spied-and-‘needed’ was $260.00. “No problem,” said Daniel, the Masai spokesman who wore a watch and carried a cell phone along with his walking stick. “No problem. Take these items with you now. I will walk to your resort to collect the money.”

Bug-eyed at this offer, my husband and I accented. The young man was earnest and not to be diswayed.

But first,  paper and pen were needed to make a list of all the goods and the families who had created them for our purchase, so that payment could be dispersed. Now I said, “No problem,” and handed them my pen and book. The page will be lost to history, but the picture says a thousand words with one: Community. Daniel’s walk spoke of Trust.