A Riff on ‘Better Red than Dead’ – with Blue Jeans 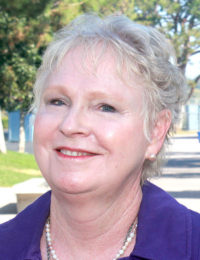 It’s said that redheads’ personalities have to be constantly, carefully managed –

I disagree. I’m blonde. I’m female, I’m human, I’m as insecure as the next. We all have to be carefully managed in the world. It’s become blasty-nasty out here. We all gotta take care of how we color and inflame the atmosphere.

Back to carrot tops … Redheads have atypical color palettes, dependent on the tone of each one’s skin –

I’ve mediated both clothing terrains: I was born a redhead, shifted to strawberry blonde during my teens, and became a California blonde when I moved to this state. According to the color consultants, using seasonal systems in the 80s, I’m a Summer-Spring. I have warmth and a peaches-and-cream complexion. I’m sweet. 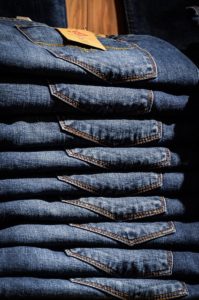 But the natural shift resulted in a smaller wardrobe color palate. Dang!

Though with bluer-than-blue eyes, the choice was already made.

I adore blue and it’s variety of hues. Dressing is simple each morning as I gaze about my closet: which blue will I wear today? With blue jeans, natch! Into my retiree years I dress as I did in my youth!

I’ll never go back. Time travel hasn’t been effective since ‘Back to the Future’… Oh, how we laughed at the zany antics of Marty McFly, his classmates, his folks.

Not to mention the wild-eyed and even wilder-haired Doc Brown, appropriated attired in a white coat, as if to take himself to the funny farm.

I am funny, but I did not grown up on a farm. Do not commit me yet! Read on…

I grew up surrounded by farms, dusted with freckles more than most, and jeans were the costume.

Then cruising through the ’60s which occurred in the ’70s in the middle of the US, differing from the coasts, the jeans were bell-bottomed, bigger than bootcut.

I blazed through the ’80s, ’90s, and ’00s when career moves ruled the clothing choice, and into the two thousand teens, when I let go of ‘image’ and dressed as I did as a teen –

Loving being blonde rather than red, too! Better to kick up the heels, kick them off, kick out the jams!

Though there are myths of histrionic character among redheads – hotheads, some say – the current phase of stardom favors them. There seems to be great commercial appeal in wholesome good looks. Where was that phenom when I was a kid? 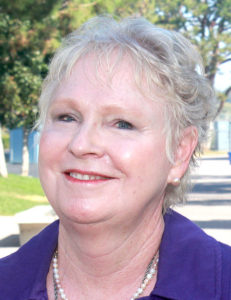 Wherever there’s an upside, there seems to be a down. Blondes have mixed acceptance by peers, blamed for a profound banality coupled with direct, deliberate torture of men. This comes from the movies, not me.

Wanton, I am not… Wanting, I am. Respect!

But I digress again. I really and truly am blonde. I’ll keep writing, spunky style, hoping to perfect with zest!

Rowdy not dowdy, I am. Perhaps I should dye my hair red. Whaddayathink?

Better to be read than dead.