Nut Free or Not 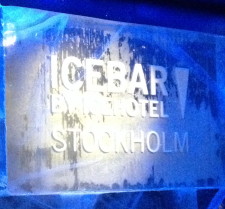 We recently returned from two weeks in Scandinavia, traveling by bus, ferry, and train through the majestically mountainous and lavishly green terrain of three countries: Sweden,  Denmark, and Norway.

These countries are filled with famously contented people, perhaps because their combined population is just a few million more than the entire LA Basin (Los Angeles, Orange, and Riverside Counties). They are not living like rats, smogged and traffic-burdened. Their taxes are high, but their countries’ services to the citizens are humanely fulfilling and complete. Free schooling: preschool – college! People’s spirits are fueled by idealism, individualism, whimsy, and wonder.

Everywhere we heard and saw evidence of a highly-scrupled population, people intent upon preserving the greenness of their majestic environment by living green, at one with nature by custom and laws. Note the sign’s verbiage, proclaiming the business to be nut free: 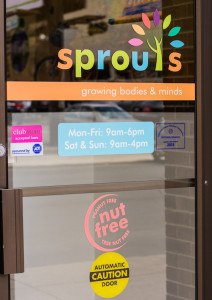 Then look at the second photo, the one taken of me, Larry, and tour group friends in another business that was not nut free: we paid for the privilege of drinking Liggonberry Vodka Punch while wearing hooded parkas and gloves in a bar made entirely of ice: floor, wall, ceiling, bar, sculptures, seats, and glasses. 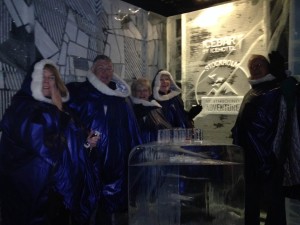 Proof that the natives have a playful sense of humor…and the countries will not be nut free as long as tourism thrives. And we bring the green dollars to spend on fun.