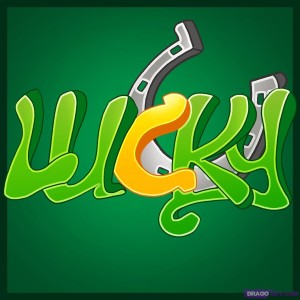 “DO YOU FEEL LUCKY?

It’s the line from a classic movie which, because Larry and I were dating, I went to see, despite the fact that I hate violence – verbal or physical – and that movie had plenty of both. I kept my eyes firmly shut much of the time, like an ostrich buries its head in the sand. But classic lines are classic for a reason, just as trite sayings are true.

A dear friend and I were recently discussing others’ intent when the word “lucky” enters the conversation. We’d each been hurt and sought answers and solace, to help sort it out. I was flummoxed to ease her pain at the time, but have ruminated much since… Finally I returned to oral communication facts that I have known for a long time: only 7% of the message is conveyed by the words that you say. The rest is connoted from body language and tone of voice.

Dr. Albert Mehrabian’s work on verbal and non-verbal communication in the early ’70s (“back when I was in school”, to quote elders, which I now am) is still considered a valid model today. He posed that the non-verbal aspects of communication such as intonation and gestures communicate a great deal more than the words that are uttered. It’s no coincidence, I think, that Dr. Mehrabian’s work was published near the time the “Dirty Harry” movie came out.

So, to my friend I say now, as I remind myself: listen to the tone of voice and watch the body language of the person who says “You are lucky”, to discern their intention and truth. Listen for sweet softness vs. a derisive snarled voice, feel the closeness of light touch or observe her clenched fists. Are the words hurled emphatically – or delivered in chimes like an angel? These elements convey the person’s heart.

In other words, you are most believable and most effectively communicating when all three elements of face-to-face communication are aligned.  My oft-noted smile conveys volumes to the world without a word.

The rest of the famous movie quote continued: “WELL, DO YA? PUNK!