Living Life as A Miracle with Her Majesty, the Queen

My husband and I have celebrated our anniversary in some spectacular fetes:

Each was special, beloved, uniquely planned. Each was relished as much as our respectfully friendly union…

But nothing prepared us for the serendipity of a royal procession: we got to see the Queen as our anniversary celebration 2014! Here is the photographic proof, pictures snapped with Larry’s cell phone, under the umbrella of the widespread plane trees of the Mall between Buckingham Palace and Parliament, where she addressed the legislators in her once yearly speech.

We watched for over an hour, such was the length of the procession with grenadiers, fusiliers, and horse-mounted cavalry, to the tune of Her Majesty’s band. Protocol of the day included unarmed Bobbies at attention and soldiers holding Uzzies semi-casually across their chests lining the Mall and its sidewalks. It was all very grand, shiny polished, and, well, majestic.

Afterwards we headed to the National Gallery where we dined on sandwiches, apples, and hot tea to ward off the evil weather, riding out the rain showers amongst its well-showcased collection of paintings. It was re-creation of our first ‘official’ date, to the Chicago Art Museum. We cherished the artful gallery trek with the benefit of Advil as the only change to our personal protocol from the first day.

Since the costs of a London meal were astronomical, a royal pain in the wallet – extravagance for which my husband is not known – it was a wholly remarkable day. A celebration that we will never forget.

Larry and I were King and Queen for a Day! We loved seeing Her Royal Hiney!

And Her Imperial Crown. 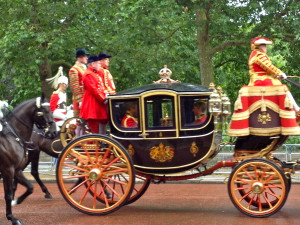