Living Life as a Miracle: US 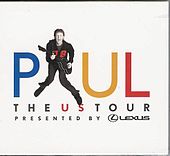 On Monday I shared my view of an enormously satisfying event and I hope that you’ve been graced with sighting it, too: a Taurid meteor shower. What a treat of Nature! “Look! Up in the sky, it’s —-!”  https://www.pjcolando.com/you-are-a-shooting-star/

Ten years ago, Larry and I celebrated another unearthly magical night, an arena rock event with music that soared into space. It was epic, something never done before and never since:

On November 12, 2005 in Anaheim, California, Paul McCartney and his enduring current band connected with the International Space Station during a Honda Center concert. We were seated fourth row center, I kid you not. Don’t ever ask what the tickets cost.

Two songs and some jaunty dialogue from the concert were broadcast to the International Space Station and astronauts Valeri Tokarev and Bill McArthur with a little help from friends at NASA and JPL. The songs played were The Beatles’ ‘Good Day Sunshine’ and McCartney’s ‘English Tea’, a song from his Chaos and Creation in the Backyard cd.

Larry and I were present, rapt in our fate. Did you see our faces in the crowd? It was Paul’s US tour, just as this was our ‘us’ night, readying to launch me into active cancer treatment, a journey into the unknown. The concert was musical reprieve from terror. Chemo had been delayed when my lumpectomy hadn’t healed well, and I’d read that chemotherapy should never be delayed or stalled to ensure best outcome, which, would be LIFE.

The previous week we’d rocked with the Rolling Stones in Anaheim Stadium, just a few days after I’d learned that chemo was required for my aggressive breast tumor. The band’s first tune was ‘Start Me Up’!

Let me repeat: don’t ever ask what these two concert tickets cost. Worth every cent, zero, and dollar sign. We captured rapture and shepherded JOY in our world!

After all, Bill Gates famously paid $17 million to the Stones so that ‘Start Me Up’ would announce his Windows launch. Money is meant to be spent, especially for shared health and happiness = us.

Constant Reader, we need a generous dose of music, hot concert tickets now to supercharge us through a bout of ill will… Suggestions, please and thanks.