“You are a shooting star” 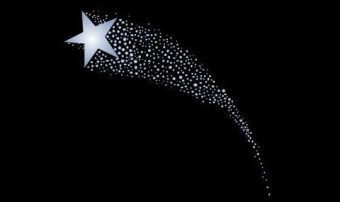 On Saturday night, a group of us were witness to an other-worldly sight, a spectacle that began with a sparkler streaking left to right across the sky…it dissolved into a green flash, larger and stronger than the sunset over the ocean type. We were among celebratory friends, not bad company, and the phenomenal event lasted long enough for this favorite tune to play out in my mind:

Glory be! Many grabbed their iPhones: some to video the event, others to search engine the source. We learned that we’d group-witnessed a Taurid meteor shower and that there may be more to come in the next month. It’s apparently an annual cosmic event, as the Persides meteor showers of August, but none of us had heard or seen the supernatural event before.

During the shower, streaks of light, or ‘shooting stars’ will be seen across the sky, caused by grains of dust and ice shed by a comet that entered the atmosphere at 37 miles per second (60 km/s). As they hit the atmosphere, friction causes them to burn up as they heat the air around them, causing the trails to be seen from the ground. Read more: http://www.dailymail.co.uk/sciencetech/article-3305042/Nature-s-fireworks-Cosmic-fireballs-set-illuminate-skies-tonight-Taurid-meteor-shower-reaches-peak.html#ixzz3r0Tig9Zp

Living life as a miracle – we are shooting stars as we streak through this life. Muse the words of the song’s cautionary tale… Notice your life.