Life as a Miracle: Rosalinda and Cindy 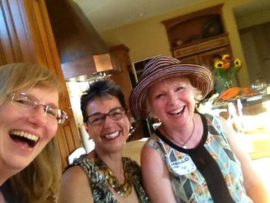 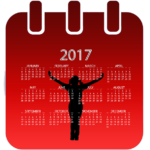 Some dates you never forget. The configuration of the room, the season, the temp. The people who showed up. Those not.

When you got the news of Kennedy being shot, when the first plane flew into one of the Twin Towers – so you could turn on the live TV coverage to watch the second improbable crash.

To mediate the immense and sudden tragedy of these sad, bad memories, let me offer: the who, what, where, why, how of your first kiss… Aa-ah.

Further, I offer a meditation on the value of God’s sudden placement of stick-tight friends: two women who were immediately in place, beside me when I was beside myself, hours after I learned that chemo, as well as radiation, was required after the initial valiant hope of one-and-done lumpectomy. Hours before surgery, in my expedited process, the surgeon received the advanced imaging report: there was highly-aggressive tumor lurking behind the relatively small one discovered less than three weeks prior. Now, a week later, the oncologist received the post-surgical report that, while the margins were clean, the aggressive sucker had ‘jagged’ edges, suggesting that bits had broken off and migrated into my blood system. 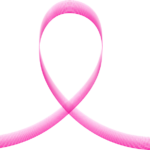 Yikes, thanks for the rushed process, no wait for a second opinion which my husband craved… rely on the network in place because I’d been involved with Susan G. Komen subsequent to my mother’s diagnosis a dozen years before. Trust in miracles, women’s partnerships, and the Lord’s.

So, though Rosalinda was a career woman whose work seldom took her to Irvine – she was just across town and rushed to hold my hand. And Cindy, who had just ended her career, lived down the block. That day and many forward, these two accomplished levelly, loving, loyal things, such as

Life as a Miracle: just the right people showing up and abiding in love. 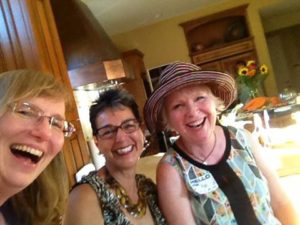