Life as a Miracle: Seven Turns 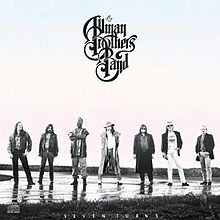 We’ve returned from a visit with forty-year friends, a couple with whom we ‘co-courted’. Courting seems a quaint term, perhaps, but applies because we were all beyond ‘dating’ and, well, date is a calendared term linked to age… Which causes one to contemplate history, which couples and dear friends have.

My husband and I are feeling quite quaint.

Famed Allman Brothers Band guitarist Dickey Betts wrote “Seven Turns” after producer Tom Dowd asked him to write something similar to “Blue Sky,” which he composed for the band’s 1972 album, Eat A Peach. “Seven Turns” was the title track to the Allman Brothers comeback album, released in 1990.

The band had not recorded together for years (do the math). Volatile rock-n-rollers are famed to act-and-react to create as much havoc as music. Also, the integral brother, the great guitarist Duane Allman, died. One of the famed Southern Guitar Armies spiraled out of control, as many did.

Rock-and-roll wasn’t invented to be controlled. It was created to ‘kick out the jams’!

‘Seven Turns’ was one of the few Allman Brothers songs where Betts sang lead. And, he recently performed it for me at my request at a nearby concert venue. You may have a  turn, if you wish:  https://www.youtube.com/watch?v=aqxywPYRCbI

The song has great significance, for it played on the car radio ten years ago as I exited a parking lot – after the November appointment where I’d journeyed alone in a bone scan machine, hoping that my body had taken a wrong turn, allowing evil cancer cells to win.

I had seven turns on my trip home that day. Safe and sound, I fervently hoped to be. Serenaded I was, soothed by a song that helped me feel my way out of an emotional jam.

The title refers to a Navajo belief that there are seven times in life that you must make a decision that determines your life path. Taking the wrong path means you must either backtrack or remain on that inevitably ruinous road.

And, in the more recent concert event, an adored musical artist, one who’d famously battled his own demons, helped me absolve a frightened memory attached to his song. Betts was the best, with a musical tribute for me, body and soul.

I’ve written about this before…can you tell my life turns on music?  https://www.pjcolando.com/geezer-rock/

BTW, the radio play prior to that fright-filled appointment was ‘Cover Me’ by Bruce Springsteen.

My husband does and I return the favor in kind. We jam together; we rock our jelly belly rolls! (wink wink)