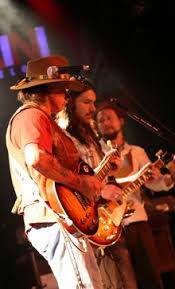 We are devotees of Geezer Rock: we can’t help it that we’re ‘older‘.

Our concerts are fewer and far between, the venues smaller and less grandiose: we can’t help it, the rock we prefer is ‘older’.

Close-up seats are no longer vital, because the aging artists’ faces are as wrinkled as ours – however, Dicky Betts’ fingers can still fly below his determined jaw. (If you have to ask who Dicky Betts is, you are not old enough. We’ll have to pull your AARP rocker card!)

We saw him, his son, and grandson playing along in “Great Southern” in his trademark melodic style: I couldn’t help but scream because they played favorite songs like “Blue Sky”, “Seven Turns”, and “Rambling Man“, leaving “Melissa” alone.

We schmoozed with Pam, a recognized waitress – she’s been working at the Coach House for 24 years. Though we come infrequently, she remembers – everything she says, so we should refer her to UCI and its memory study.

When I asked how she navigated the loudly reverberating music, mingled with beer and food orders, credit cards, and sweat, she grinned

and said, “Geezer crowds are quieter.”

And, of course: we all have diminished hearing because of great rocking music since our youth. Not because we are ‘‘older’.