Coachella is not a handbag brand 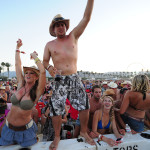 At raucous provocation rock-and-roll music excels, bested only by rap for how it can build you up from what beat you down.

Some bands begin with their name, but talent is what truly makes the name:

What do these bands have in common: they headlined Coachella, the music festival at the toaster oven site, the Empire Polo Club in Indio. The weekend event is known for its large art pieces and cutting-edge artists’ performances. To be there is to be on the cusp of culture, it’s said.

Coachella, my any-age American friend, is not a handbag brand…though many of its attendees get bagged.

It’s been hot-hot-hot since 1999. My husband and I were dedicated music festivalers, but declined for the sake of comfort. Music is too easily streamed to accord suffering. Recall what I wrote about Woodstock? https://www.pjcolando.com/woodstock-nation-taking-stock/

Take an info break from this blog to find out, Google style, but return. There recently was a ‘what’s your band name’ quiz on Facebook. Here it is, play it now, and then post your name’s band name in the comments.