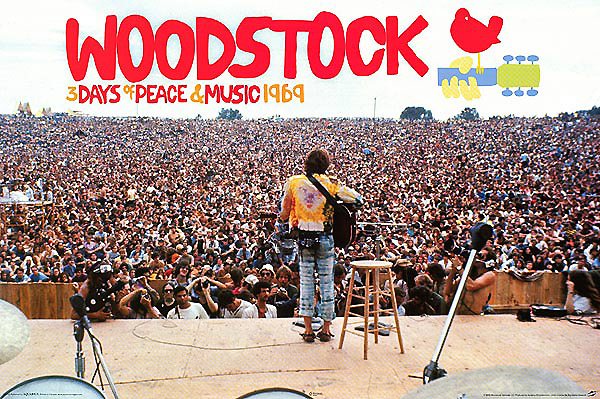 How would you have liked to awaken to the “Star Spangled Banner,” rendered on guitar by a black guitarist, one who invented a new way to work the strings with his overlong thumb? One who famously set his guitar on fire, actually as well as metaphorically.

If you were a member of  the Aquarian Nation at Woodstock, forty-five years ago today, you would have been thrilled, enlivened by his sound.

I would not have been. Despite being a rock guitar aficionado, I would have already been home. The Woodstock Nation, so widely acclaimed for its utopian vibe, was half-million people – an overcrowd of hungry people – and mud. Gag! Grope! Gone!

The “3 Days of Peace & Music” showcased such soon-to-be famous talent as Joe Cocker, the Grateful Dead, Richie Havens, Joan Baez, Santana, Janis Joplin, The Who, Sha Na Na and Jimi Hendrix (the black musician who wowed with his revved-up ‘Star Spangled Banner’), among the myriad acts that took the stage. Crosby, Still, and Nash has just met to blend their sound, playing for the first time together on any stage anywhere, they said – at 3:00 a.m. I would have been asleep – not there, but in my bed at home.

It was a manic-depressive, dyspeptic time for America. Though the festival took place about a month after the U.S. sent a man to the moon – a miraculous highpoint – the Vietnam War was still raging. Young men the age of those in the crowd and on the stage were dying from another country’s guns.

A character named Wavy Gravy worked Woodstock alongside fellow members of the nearby Hog Farm commune. The group served food to the concertgoers and aided those whose LSD trips had gone bad. I would have hate communal life, too – accounts I’ve read revealed that women did almost all the work.

In a rainbow wig, symbolically portraying the Woodstock vibe that surmounted the days of rain, Wavy delivered famous stage announcements(“No rain! No rain! No rain!”), including “We must be in heaven, man!” which became the Woodstock Nation rallying cry. I wouldn’t have agreed because my version of heaven doesn’t have a mud floor and no public toilets.

Woodstock, which for a time become synonymous with the possibility of a better world, has faded. The current Starbucks Nation is more to my taste, though not my price. The free and freedom of Woodstock would have been sublime.

My husband and I were recently fortunate to travel to the British Isles, with Liverpool as an overnight stop. Excitement was overcome by a wave of concern, then chagrin, as we entered the Cavern Club, comped by our tour manager, and then walked down 4 flights of steps to a narrow room clad in brick with ceilings arched like wine storage rooms. Though there was a modern air circulation system, along with a reasonable Beatles facsimile band, I would have hated the Cavern Club, too.

I saw the Beatles in concert in Indianapolis, Indiana 45 years ago. Better than Woodstock, better than the Cavern Club, but then better on the stereo system at home.