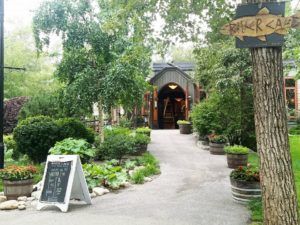 What kind of person would quip thus to a waiter: “Bring me the smallest check, please?”

A cheeky one; that’s me, in case you don’t know. I may have smirked, but I didn’t wink. I promise; I was sincere.

What kind of waiter would take overlong to return to our table with the check…as he endlessly reduce-copied the bill to a thumbnail size. (yes, this story is old enough to be set in a time when copy machines still topped back office desks).

A waiter on his last shift in a Calgary restaurant before a move to Seattle; that’s who.

I carry that teensy bill in my wallet still, though it’s burrowed behind my husband’s photo… Wouldn’t want him to get any false ideas about my loyalty and love.

I think we should book a trip to Seattle with a quest to dine in each restaurant in the city until we find the man. Wanna come along?