Bansky is alive and well in Bethlehem 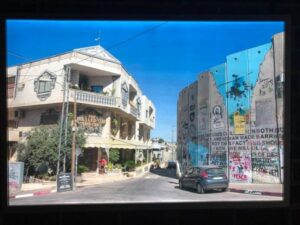 We recently went to the Holy Lands, visiting many ancient, glorified sites. Each was spectacular, filled with the Holy Spirit, and a delight – despite the near-daily drenching rain. No, God did not command the skies to clear for our visit.

Our small band of tourists even crossed an unexpected border, to venture into Bethlehem, the humble home of Jesus and his family. We hadn’t realized that Bethlehem was in Palestine. The border crossing was swift (thank god for American passports). Yet, what an education in politics and clashing of religions. Swift. Reality. A jolt to our senses, especially we live in a country with no border crossing between states. (Israel is about the size of Vermont)

Another jolt – We hadn’t realized that the Israelis had erected a concrete wall. Which was quickly covered with graffiti. Like the graffiti on the wall in Berlin, which we witnessed shortly after its fall.

Street artists preferred another term – and we encountered examples of the work of the most famous street artist of them all: Banksy. Banksy is an anonymous England-based street artist, vandal, political activist, and film director.[1] His satirical street art and subversive epigrams combine dark humour with graffiti executed in a distinctive stenciling technique. His works of political and social commentary have been featured on streets, walls, and bridges of cities throughout the world. (source: Wikipedia, so follow their links. It’s all good, it’s free, and available worldlwide.) 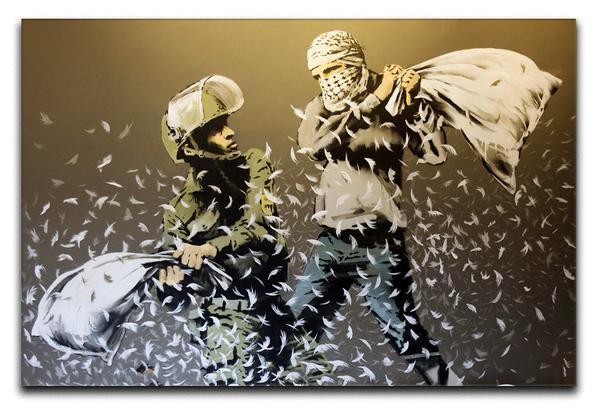 Banksy is not only alive in Bethlehem. He is flourishing. He has an art shop and he’s recently opened a hotel for ‘wall tourists’ where his art is prominent. Who knew of these events?

Well, you do, now that you’ve read my blog. Don’t you feel smarter and more worldly-wise have having visited? Please come again 😉 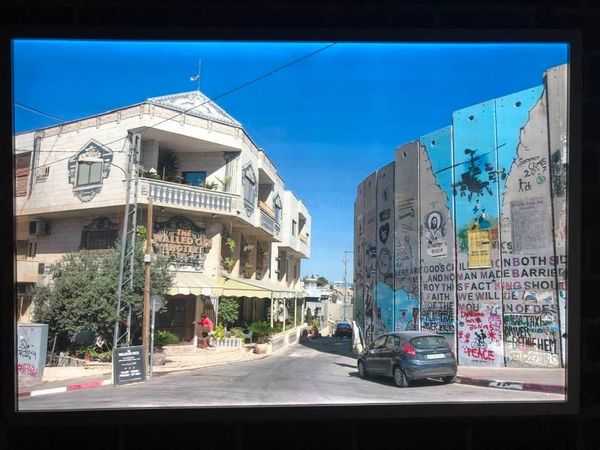 Alternately, you may book a room at Banksy’s hotel http://walledoffhotel.com