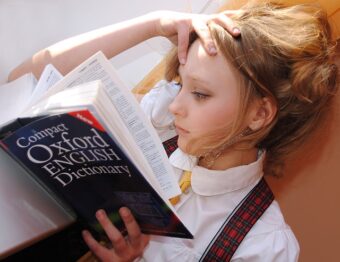 Do you have authority in your language when you speak and write? Want to know how… well, follow me 😉

Power words also define. There are literally thousands of words from which to choose (notice how I flipped the word order around to let the one-syllable word, the verb, to end the sentence with authority and punch)

The tools of authority are well-honed by reading lots of books, though not necessarily the dictionary, as pictured below. By noticing the patterns of others who you admire. In talking and writing.

Back to the picture. Notice that a young female is pictured. Young and female – and blonde – do not translate into power in speech. In fact there is much derision and assumption attached to blonde.

Let’s blame it on Marilyn Monroe.

Marilyn employed breathiness and near-whispered sultry speech. She swayed men, but was not admired. Breathy speech is equated with weakness and not power.

Ending a sentence with a questioning uplift of pitch is also not equated with power. Until the ’70s, when liberation came to the fore, this was the typical tone of voice used by women to denoted submission to one’s mate. Grr-r-r-l power became different after that. Praise.

Women became people to listen to and reckon with. When they altered their tone of speech and patterns of language.

The other factor in the picture is youth. Youth do not often wield authority, discounting the mandate of a baby’s cry, of course. Listen to those around you – everyone alters their voice when they talk to a baby.

Everyone changes behavior, including body language and tone and word choice when talking to a cop.

Finally, here’s a tribute to Shakespeare, the penultimate inventor of language. Read and salute!