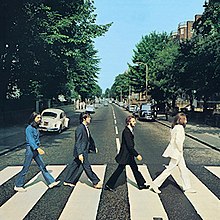 Arguably the most famous album cover ever, one that has been endlessly imitated and inspired countless tributes, Abbey Road is quite simple. It consists of all four Beatles walking across the street in front of EMI Recording Studios, where the album was recorded. Photographer Iain Macmillan took a half-dozen different versions of the iconic photo. The date was August 8, 1969. Ian only had about 15 minutes because that’s how long a police officer was willing to hold traffic.

For all that, Abbey Road wasn’t the album’s original title.

Everest, after the name of the cigarettes that their everpresent engineer, Geoff Emerick, smoked. Like a chimney while the Beatles worked out their magic. But the Beatles didn’t want to travel to the Himalayas for the requisite photo shoot. Can we blame them?

Perhaps the Beatles intended Abbey Road as a grand farewell, as fans and the music industry surmise. Maybe the notion is confirmed by the elegiac note Paul McCartney strikes at the conclusion of its closing suite. It’s hard not to interpret “And, in the end, the love you take, is equal to the love you make” as a summation of the group member’ philosophy and entire career.

Maybe not all of the members, but certainly McCartney’s.

McCartney‘s playful eccentricity juts against John Lennon‘s curdled cynicism, while the band thrills in sudden changes of mood and plenty of guitar, culminating in McCartney, Lennon, and George Harrison trading solos on “The End.” Further, Ringo plays the only drum solo on any Beatle record in the tune. Mea culpa and farewell, indeed.

Abbey Road is so much greater than the sum of its parts. While a single song or segment can be dazzling, having a succession of marvelous, occasionally intertwined moments is not only a marvel but indeed a summation of everything that made the Beatles great. The album is a masterpiece that transcends time. Click on the link to hear “The End” – https://www.youtube.com/watch?v=12R4FzIhdoQ

Likely because Paul McCartney was left-handed, his shoeless stride, is out of step with the other Beatles. These were two of the clues for the infamous fury of the “Paul is Dead” controversy in the fall of 1970, as the Beatles were breaking up. I never believed any of that crap, Paul lover that I am. Paul is one of the two Beatles who are alive today – a testament to his longevity.