in 1921 a playwright coined the word “robot” for a science fiction play. I learned this fact at a UC Irvine lecture showcasing their center dedicated to stroke rehabilitation with the use of robotics. Credible, incredible stuff.

80 years later, the world had ASIMO,  which is an acronym for Advanced Step in Innovative MObility. Developed with humanity in mind, science fiction became science fact. ASIMO led the Rose Parade, which you know to be 1 of my favs, and was adopted by Disney in 2011.

Never doubt the power of language to shape the world. Nor the desire of people to help others.

Never doubt the will to live.

In April, 1989, the ‘Central Park Jogger’ was left near-dead after a savage assault and rape. With intensive, comprehensive rehab, love of friends and family, full focus and an indomitable spirit, she re-wrote medical thoughts and theory on neuroplasticity within two years: 1991. As you can see from her book cover, she recovered. She is well. 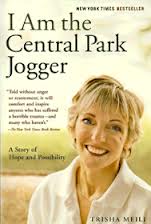 Never doubt the power of a 1 woman who wants to write her own story.