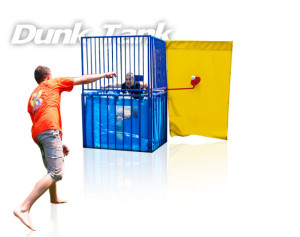 It was the 60’s in northwestern Indiana. Though our small town was proximate to the trials of the Chicago 7 and pre-election riots televised for all to see, we were worlds apart.  We lived the idyllic, self-contained, ritualistic life of those close to the land. Adventure was going to the local A&W drive-in and deciding what size of root beer, served in a frosty glass mug with a handle, to imbibe after watching Peyton Place, the grandmother of the current gossip dramas on TV. Maybe daring to take the mug home…I have a small one on my shelf, a trophy.

It was May and our town was having a community fair, a fundraising carnival of camaraderie. Our church youth group director proposed our entry: a dunk tank. Super idea, but…our youth group had ten members. Peer pressure! My hand rose to the occasion, and I volunteered for an hour stint on the dunk tank seat, 7:00 – 8:00 p.m., Tuesday night. I thought it would be cool.

Of course, I was the principal’s daughter in a school with all twelve grades housed in a stocky brick building at the edge of town. We lived five blocks from it – and two blocks from the single street downtown. There were approximately 700 people in the town, while many large families lived on the huge farms surrounding it. Knit tighter than an angora sweater.

Though the small town was on a main highway, there was only a blinker light above the town’s main intersection. The Kit Kat Cafe was a Greyhound bus stop, but the Monon Railroad had stopped passenger service. Two churches, two bars, so heaven and hell-catching were even. With only an abysmal allowance, I spent all of my money on Beatles bubblegum with photo cards (collect them all!) and teen ‘zines at the five and dime store.

Did I mention that my father was a control freak who parsed out opportunities to do anything at all as if they were first prize at the county fair, less free with dispensation than a pope? As principal he knew way too much about all of the local hooligans. Perhaps it was just that I was the first daughter and he didn’t want me around guys like he had been… I wasn’t even allowed to drive, though there was nowhere to drive anyway. I longed to be cool.
I was a volunteer for a noble cause, but I wasn’t going to martyr myself and beg permission from the Controller of the house…so I dressed carefully in my best tee and jeans and snuck down the back stairs of the house. A brisk walk down the alley, past the Catholic Church, and I sidled up in the back of the booth, beaming for the church group leader, and worked my way into place on the dunk tank seat. Smiling! Ready, set!

Why didn’t I think of the reality: that all of the boys in the high school might line up in front of the dunk tank booth, mischievous glints in their eyes, and that most of them were on the baseball team? And that I’d get dunked over and over and over…You bet I was cool – the water was icey and I was often in it.

Why didn’t I think of having to climb the dunk tank ladder repeatedly, and then slink home, wet to the bone in the cool, humid air of early summer in Indiana? Why didn’t I think of having to climb back up those back porch steps and all of the steps to my second story bedroom, tiptoe down the hall, peal off my wet clothes, and then grab every towel in the linen closet to wipe the trail? And where to hide the mound of wet cloth? Of course, run the dryer! After all, it was on the back porch I’d snuck past. Thank goodness dryers didn’t have buzzer signals at completion, and that I enjoyed reading.

Why didn’t I think of having to stay up until 10:00 to fold and replace all the towels? At least there was time for 8 hours of sleep before school and all of my homework was done. Thank goodness my tattletale sister didn’t awaken…

My parents never said a word, though the tale must have circled the small town and surrounds, moving at communication satellite speed until every ear heard. The youth leader never thanked me for all the money I made for the missions either… But I caught neither a grounding nor a cold – and I was cool!

I was the one-and-only wet tee shirt contestant before they were even invented: I won!