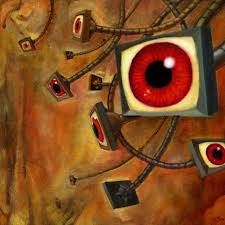 The novel was actually published in 1949, amidst the post WW2 euphoria. People thought George Orwell was dyspeptically grim, but it reached iconic, bestseller status anyway, infused with the universal paranoia that some men of letters are determined to feel.

It’s ‘Big Brother’ was memorialized further when Apple introduced its computers in the famous Super Bowl ad, the absolute origin of my avocation of watching the ads rather than the game. Many have rallied to the cause since then; I am ever the pioneer. But I digress into self pep talk again. (yeah, Constant Reader, you’ve visited this blog before. You know the drill: it’s my write. So there.)

Call me a curmudgeon; call me a contrarian; call me whatever you will. But don’t call me later for par-tea – except this one…

There’s been a boatload of paranoia driving the US post 9/11. We’ve had our personal phones tapped at will by our government. Authorities have posted cameras everywhere, monitored by minimum wage young men in soldier-like suits.

While this works out well to trackdown the Boston Bomber and petty 7/11 hysters everywhere, it bodes poorly for personal privacy. That an entire generation hold their phones, clutching them close at all times – a device that pinpoints them perpetually on the face of Earth – is enticingly open to tampering of whatever malevolent character snags control. Because we have willingly forsaken personal control – a spine of American character – for ‘the greater good’.

Then along comes Facebook and well… Facebook upped the ante two months ago when it purchased a local firm called Oculus. Now current reality can be supplanted by virtual reality with one’s own headset. Look up the invention, note it’s look, so very like blinders for a horse. Yikes.

I am relieved that I believe in a personal God, a heaven where I will be able to thrive beyond this world, a reality that seems closer – and more welcome – all the time.