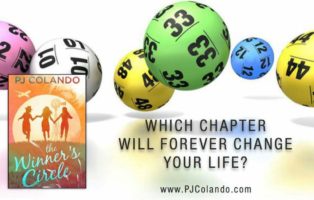 Woosh. All the air left Bonnie’s lungs. The moments-ago lobby scene with Jackie was bad—well, she admitted it had been a fight. Not like the grasping-and-clawing, utterly gross mudwrestling Bonnie had glimpsed during an online search for one of Pastor Rankin’s sermons, but it couldn’t have been described as a discussion, either. Jackie had pointed an unchristian finger at her and shouted her inadequacies to the world.

Bonnie felt shaken, verbally mauled, and maybe, just maybe, deservedly so. As Jackie recounted some of her slights, using all of the fingers of each hand twice, Bonnie admitted that it sounded like soap opera dialogue. As if having their husbands jailed wasn’t enough.

Then, Jackie stormed off, despite their shared quest to feast rather than text Fran again. Crullers and Maple Creams and Bear Claws. Oh my.

Bonnie looked at her watch, but the glimpse wasn’t helpful. She didn’t know if it was morning or afternoon or yesterday, today, or tomorrow. All she knew was she was alone in the Intercontinental Hotel in Sydney, Australia, clutching her arms to her midsection to prevent herself from spinning into orbit.

Quickly Bonnie lowered her arms. Though confronted, she still had her dignity. And she wasn’t alone. Inside a French handbag she knew to be worth more than Jackie’s van, her wallet showcased a rainbow of credit cards as well as lipsticks, lotions, and tissues. While she dabbed moisture from the corners of her eyes, Bonnie collected her thoughts.

When she crumpled the tissue, a polished nail grazed a substantial diamond stud. Bonnie tossed the tissue in her purse, just to touch her wallet, to remind her ego that she access to cash in uncommon denominations without the LLC account numbers. Australia had to have ATMS.

Ah, heady power of plastic, buttressed by beaucoup bucks in beaucoup banks. Who needed a fleshy sidekick when another could be bought?

Bonnie flicked her hair and flaunted her walk, wrapped in new leopard print pants. She popped over to the concierge’s desk, got a proper suggestion for nearby eatery as well as an ATM, and swooshed through the hotel’s brass-trimmed revolving door, bidding its self-propelled swirl to revive her.

Carl would soon be by her side when she posted bail. Bonnie assumed he and Steve would help to mend fences with Jackie. Fran and Judge would help cook up a plan to subvert the trifecta of lawsuits. Bonnie felt self-confident, brimming with resolve.

Suddenly her tenuous mood collapsed. A dozen big-lensed cameras lofted on the shoulders of squint-eyed and swarthy men, bulked further by hooded parkas, swiveled as one to her. Instantly, a dozen microphones, wrapped against potential whistling winds, jabbed toward her like drawn swords. She backpedaled to call Jackie, but her former best friend hurried down a wide, chandeliered hall, reduced to Lilliputian size, not in earshot.

Bonnie burrowed into her mink coat. She fumbled in her purse in vain search for some irresistible words or her cell, neither there. A pair of little white gloves, like those she’d worn on Easter Sunday as a child, would be useful as well: to accessorize her salute when she flipped the gaggle of reporters off.

Bravado shriveled. She could only manage a single syllable, a mixture of a plea and a sob, “Carl.” She needed more than a handbag plan. She needed her man, but he was unavoidably detained. Bonnie deep-breathed and strode back outside.

She scanned the reporters, all male. She searched for one not crowding, shouting, or stabbing a microphone toward her chest, one she could maneuver past to escape. She shook her loose-curled hair into a curtain to shield her face from the spit from their rapid fire questions.

Bonnie glanced over her mink-covered shoulder, hoping for hotel staff reinforcement, someone to call a cab to haul her Cinderella-like to the ball. Better yet to possess Superman’s ability to fly and airlift her to safety, since Carl was jailed and couldn’t unfurl his cape.

Carl. Bonnie forced a smile. She’d get to him somehow, but now she craved a human sidekick, preferably someone in a law enforcement uniform. She craved a whistle to call the hounds off.

With Carl and Steve incarcerated and the hotel staff apparently on break, Bonnie’s boots might be her only tool. They were the costly boots of a prosperous cowgirl, but still… She wished she hadn’t been so snarky to Jackie in the past twenty-four hours. Well, for several weeks. A minute ago, her best friend snapped, “Haughty, Naughty Bonnie, your comeuppance is here,” and left.

Was that an improvement upon being called “Brassy” and “Bossy?” Bonnie Voss Edwards abandoned to the jackals? Was this how that ‘Born This Way’ Lady GaGa star felt?

Well, she hadn’t been born this way. Nor did she have staff to inoculate her from this throng of pushy ill-will wishers. She wished she hadn’t insisted on grabbing her mink to wear to the police station, but good Lord it was winter. She hadn’t yet unpacked her several suitcases.

Haughty and naughty. Was that how she came across? She clawed at her loose curls to untangle them. Their shower curtain effect hadn’t worked, and she must look a sight. Tomorrow, she’d see herself in every newspaper in town. In the world. Back home Maybelline would shriek at the mess Bonnie’d made of her handiwork.

Bonnie kept churning thoughts to keep her mouth sealed, a grim smile glued in place as the cameras winked and tape rolled. Bonnie tried to not capsize from fear and grief and the unknown. Bonnie’d brought her posse with her, but a series of casually-considered acts had banished them from sight. Everyone at home knew Jackie was the kind of person who helped anyone with the door when hands were full. Her hands were full now.

Wacky Jackie, come back! Bonnie wished she’d recalled that long-ago, infamous name as a retort when Jackie had hurled the Haughty, Naughtynickname at her. Tit for tat, imagine that, an old jump rope rhyme.

Crapola, I wish I had not thought of rope. Bad imagery for the situation, for the jailed men and for me.

Bonnie heartened herself with reminder that Judge was involved. That man could be docile as a doe or savage as a beast, but he was always sage. While she was faraway, too, Fran would involve her new husband and Bonnie’s former boss, Pastor Rankin, who should entice the Lord to intervene.

Bonnie unobtrusively patted herself on the back, while cameras flashed and video whirled. She prided herself that she had handled every word and deed available to sinners, er, church members in her capacity as the secretary, with the preacher in the next room and the Lord above to back her. She expected returned favors now. She needed support, dang it.

Bonnie ran her palm down the lengthy front of her mink. Cameras click-click-clicked. The men apparently thought she was imitating Marilyn Monroe, though, in truth, the languid movement was her effort to stop herself from stomping her foot. A tantrum would not do, but a sexy photo would suffice. If the jackasses wanted coverage, she’d give it to them.

All her life Bonnie’d wanted attention, to be at the head of the line, the class, the roll call. Now that she had it, the pedestal wasn’t so cool. Vertigo caused nausea to rise in her throat. But public puking would not do, especially in coveted boots and mink coat.

Contrarily, Bonnie began to rock back-and-forth. It was difficult to emulate an heiress in these conditions. She could feel her pulse popping her neck. She made a choice of thoughts. Judge, I need you more than the Lord right now, she half-whimpered, half-shouted into her coat sleeve. I can’t face the tasks of posting bail, visiting the jail, and finding a suitable barrister on my own. I wish I hadn’t become so brash and controlling that Jackie backed out of sight. I can’t handle abandonment now.

Just then, Jackie appeared with two tall paper cups of coffee. Bonnie could almost smell the fresh roast from her cornered animal spot, fifty feet away. She watched Jackie maneuver up the middle of the reporters, parting them like the Red Sea. Her mink coat buffered her moves.

Bonnie heard, “Back off, Buster!” emerge from Jackie’s clenched jaw several times. Her demeanor suggested that Jackie was capable of blithe atrocities, anything required to free her friend from this hoard.

When Jackie arrived at Bonnie’s side, she turned and held one of the cups aloft. “Everyone back off or I’m going to take the lid off these Flat Whites and fling the contents over the lot of you.” Using her lunch lady bellow, Jackie boosted the second cup. Bonnie watched her dare a dozen reporters with her lunch lady stare. One by one, the men became teenaged boys and obeyed.

Bonnie was proud witness to jackals intimidated by a Midwestern farmwife. Her sunbeam smile returned when Jackie hurled a final remark over her shoulder as they bolted from the hotel entrance, “You can tell that greedy bar manager that he can’t soak an American citizen without expecting to get soaked in return!”

Bonnie laughed so hard she almost fell and ripped her mink as the women charged away. Mid-run Jackie ripped the lids from the coffee cups and overturned them. When Bonnie saw no liquid splash out, her knees almost buckled. The cups were empty! Wacky Jackie was back!

Jackie pulled Bonnie down the street, both laughing like hyenas. They ducked into the coffee shop, where they requested American coffee, Super Bold. Their order evoked a quizzical look from the barista, similar to the reporters they’d left slack-jawed after Jackie’s rescue. Perhaps it was the mid-morning wearing of minks.

“Bonnie, Fran telephoned Judge. A plan’s in action., but guess what day it was in Michigan?”

The barista shouted their names just as Jackie’s face broadened into a grin.

Bonnie rose to claim their coffee orders. By the time she returned to the table, she still hadn’t fully processed the time zone differences, so Jackie filled in, “Like it was the time yesterday, when our men went off to celebrate something unknown.”

Bonnie just sipped. It was as if all of the bossy and bitchy and haughty and naughty had drained like a Jacuzzi tub, her energy spiraling to nil. What good was money if you didn’t have your man, your friends? Bonnie felt like a four-year-old in time out, glum and forsaken, a disconsolate child.

Jackie pressed past her gloom. “Don’t you wish it was still yesterday afternoon and we had a do-over?”

The liquid she swigged was so strong, it made Bonnie’s eyes water. She stalled by clearing her throat, then tipped her cup to show Jackie. Its contents were almost gone. “I need another cup. Be right back.”

When she returned to the table, she replied to Jackie. “I can’t help thinking that, if we’d gone with the guys, we’d all be in jail.” She squirmed and turned to face Jackie, “I regret my attitudes. May we have a friendship do-over?”