We Live in the Projects 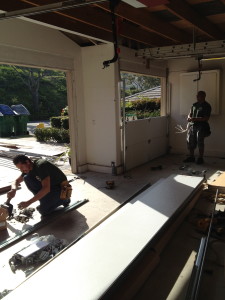 The great garage make-over of 2012 has begun!

Yes, you read that right: 2012. My husband is a R&D man. Rather, he’s an R&P man: Research and Planner. I often thank God for Google – and Larry should, too. He’s occupied for hours on end, looking for garage flooring and doors, shelving and the like. But he seemed stuck in his head, almost like a writer does (who me?), forgetting his fervor for chores.

He’s been content, but I have not. He made me give up all of my vintage clay pots in 2012…okay, they’d not been utilized since our home remodel in 1993. But they were my grandmother’s, gifted to me when she died, several months before I even knew him.

Beyond that, the 1992-93 remodel’s focal point was to gain a 3-car garage…so that my husband could do wood-working projects in the third bay.

Lights, Action, Cue the music: “do-be-do-be-do”! There’s going to be new energy in the house: I love it when my husband does projects, directing a symphony of tools.

And I get to help, whether holding the ‘dumb end’ of the retractable tape measurer or kibitzing about how to accomplish a task. We work well side-by-side, as partners.

The great garage make-over of 2012 has begun – I’ll let you know when it’s finished.

Oops, it’s been so long since Larry has engulfed himself in a home project that I’ve forgotten our motto: this old house can never be finished…because then we’d have to move.

We live in the Projects.