The Language of Love 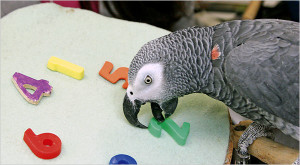 Six years ago on this day Alex died.

His last words were spoken to his trainer, Dr. Irene Pepperberg: “You be good. See you tomorrow. I love you.”

Alex, the African gray parrot, lived 31 years. He was smart. He learned hundreds of words and combined them novelly into sentences, helping to shatter our human arrogance that we were the only earthly beings capable of language.

He was famed for speech as well as language. You ought to surmise that these are two separate things when my job title utilizes both, as humans capably do every day. For most of us, it is magic and happenstance; for others there are people like me who work as hard as Irene Pepperberg, Ph.D.. While fame is not our due, our worth is secure in the hearts of the people who hear their loved ones talk, especially when love is expressed.

Alex and his dedicated trainer’s early years were at Purdue University, where I studied speech-language pathology. Our buildings were only a couple of blocks apart, but our paths never crossed on the populous campus.

Those were heady days, when I was learning the elements of the career that I adore. Linguists were buzzing about the fact that bees flew patterns to communicate the location of flowers to the other worker bees when they returned from the hunt to the hive, a configuration called the ‘Waggle Dance’. While humans were doing the Watusi, the bee dance was honey-producing. Humans were dancing to find honeys…a different kind of production.

The ‘humans are not as special as we thought’ trail had already been blazed by a wonderful female chimp, Washoe, who was trained to use American Sign Language by Drs. Gardner in the 1960s and ’70s. Washoe was the first to distinguish herself, a ‘mere animal’, by combining words in combinations that showed original thought and intent. She further distinguished herself by teaching her children and other chimps ‘in the neighborhood’ when she retired from the project.

How wonderful that Alex, the African gray parrot, lived a long and productive life for himself and the annals of animals.

How wonderful that his last words were “I love you” to the woman who loved him.

How wonderful that we have these words to express our thoughts and intent, too. And, just so you understand, love is an action, not a mere emotion.