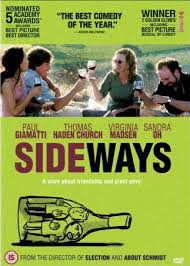 If you moved Sideways across America from California, from the ‘left coast’ to the right, you’d trip over Indiana on your way to Maine.

The winds of change would have to blow you a bit north, or else you’d wind up in Jackson, Mississippi. Which may or may not be a good place, based on my nephew’s experience: he had his premo car stereo stolen last week-end. But he is completing a work assignment for an architecture degree, so it’s not all bad. There is assurance, as well as insurance.

By Christmas it had become a phenom, and my husband and I went to see it during the holiday week break from our jobs. Everyone in the theater howled. Throughout the film.

Yes, even the women laughed aloud at the misadventures the hapless juvenile adult, Miles, sad sacking through a road trip to the central coast wine country with his over-sexed cohort, Jack – a hedonist about to be married to an openly-rich and adored daughter of a Beverly Hills mogul, flying in the face of his good fortune. The ode to wine, especially the Pinot Noir of the mildly hilly rural wine area, put it on the map. Literally.

Yet today, a decade later, there are several web sites of Sideways wine tours where one can retrace the movie route and garner a bit of its grape glory. It’s a good time. I highly recommend a central coast winery tour: the ‘sipping field’ has grown.

Meanwhile, back in central Indiana, our family members also ventured to the theater, braving snow and sleet, that holiday week in 2004.

The family universally hated the movie, stating that everyone in the theater groaned. Some people left early, but, of course, they did not. Stalwart – and steadfast in their hatred for all things CA.

I’ll remain in CA, thank you, vindicated by ‘Hollywood and Vine’.