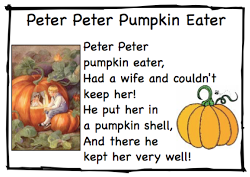 Here we are in the calendar year, in the calorie-laden territory of pumpkin; my husband craves its pie.

He is Larry the Pumpkin Pie Eater. With a belly to match his taste buds, though it doesn’t get in the way of hugs, so we nevermind.

For a man who expounds on his hatred of dessert, that Larry adds poundage this way is as nonsensical as a nursery rhyme.

My husband would never put me in a pumpkin shell: I, too, have poundage around the middle, finding myself shaped more like a pumpkin with each passing Boomer-aged day. Besides he knows I abhor ‘ooey textures’ – ickey-yucky is not for me. Don’t invite me to a mud run for fun, despite the clear fact that a run would help me wittle the middle…

A verse collected from Aberdeen, Scotland and published in 1868 had the words:

I do na like this verse better – I’ll nary speak a wee word as Larry eats his pie. 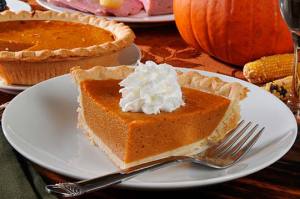 Though I’m not afraid of mice, I’ll pray that they are blind and stay away, away. We’ve already been disturbed by armies of ants, but, well, they are small and easily conquered. I do no like loud noises, so the snap of a trap would scare me.

I wish to remain the well-kept and calm Good Wife Baker.