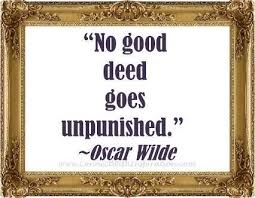 I first heard this statement in the summer of 1997. A wise mentor gave it voice after I’d written a ground-breaking grant and determined to shepherd its project to fruition. Naive person that I was, I learned its lesson hard.

Eight years later I was diagnosed with breast cancer. Eight years is the time estimated by medical researchers for cancer to grow to a detectable size. Coincidence? I think not. Stress causes illness, and stressed I got.

I neglected to ask my mentor/friend what the saying meant, but I learned… Basically, “No good deed goes unpunished” is a wry way of stating that going out of your way to be kind, thoughtful, or considerate doesn’t always get the expected result.  You know the saying, “Virtue is its own reward?”  Sometimes it is and sometimes it isn’t.

As a naive, helpful person apt to forget, I’ve experienced openly disastrous, intentional-to-harm, consequences for kind deeds again and again. Yeah, my heart still smarts because I seem unable to foresee and fend… Though I possess a mighty intellect, and a resourceful sense of humor, my head isn’t smart enough to retort.

As a practiced artist of human nature, you’d think that I’d spot blonde vipers before they publicly stab, but I don’t. Perhaps it’s because my hair color and kind heart are natural and theirs aren’t…gosh, I love word play. Wink. Wink.

What do you feel/think, my friend?

(BTW: I think it’s wild that one of my favorite quotable people observed and said this first)