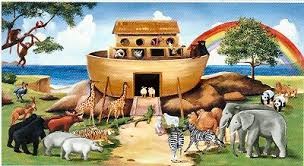 Spoiler alert: this post is a Rambler with no Narrative Arc.

Narrative Arc is not like Noah’s Ark, a Biblical tale with a narrative arc, if there ever was one. Imagine it: all of the critters of the world, cruising 2×2. My husband are going to cruise, just us two, creating a long-craved-and-lazy narrative via Vacation. Not in a craft like Noah’s – though one might come in handy as El Nino rains its rains.

Narrative Arc is one of the first terms I heard as I entered Writers’ Group World, one that I was too afraid to ask the meaning of.

But I knew that every story had to have one; it was a mandate clear and true.

Just to be clear, an amusement park, WGW is not.

As an active participant, one is beset by the vagaries of opinion, bluster, and gems. One is helped or chest-bumped, unevenly at all times. Writers are people and people can be crumby and that’s the way ’tis.

And through it all I learned, grew, bounded-and-rebounded. My writer’s path ebbed and flowed like the bell curve of human population, with most people clustered in the middle, at the top of the curve, but not at the top of the heap.

People are people and that’s the way ’tis.

For several years my WGW Narrative Arc looked like a nightmarish map of Irvine, Laguna, or Aliso Viejo. A city scape or suburban neighborhood layout full of circle drives, cul-de-sacs, and one way streets. Detours, around-a-bouts, and dead ends. Yet still, in spite of and, in some ways because of WGW, I published a book.

Shazam! There’s my silver lining rainbow, my personal meaning, my Narrative Arc. I did it; it’s done.

Now that I’ve achieved (I didn’t claim ‘arrived’), I question rules and staples: are all books bound by Narrative Arc? (or are they bound by staples – wink, wink)

Not Lee Child’s highly successful series; Jack Reacher hasn’t changed a wit, and readers the world over love him.

Saddle up and ride the Bronco of Narrative Arc, a wild pony ride – or a Rambler, if you will. I perennially figure that, if I can do it, any one can. Just follow the Narrative Arc.

P.S. My husband and I watch little tv and, as we do, in the past few months, we’ve noticed narrative arc has arrived in commercials. Watch and see, Constant Reader, and let me know what you think?