Life as a Miracle: iPhone Home 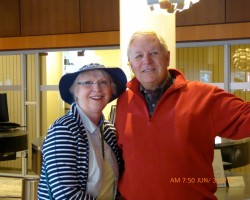 My husband and I are not obsessive text-tweet-selfie-posting fools. When we vacation, we unplug. In today’s vernacular the term is off-grid: no emails, no postcards, no phone home. We liberate ourselves from the entrapments of daily life and self-interest to immerse ourselves in what’s new, immense, and worshipful abroad, to grow larger versions of ourselves.

Besides we’re vastly aware that others are more interested in themselves, and that no one is dependent upon us. That’s not a hurt or complaint, it’s just our life: free, sometimes lonely.

However, Larry intended to take his iPhone when we went to Scandinavia last year. As a leftie, it’s far easier to take photos with an iPhone than a right hand-oriented camera, which all are. He also gets to call the shots, er take his own shots, without the camera coddler’s permission…

He has his own perspective. The upside is that I’m in scenic photos, too.

However, our Uber arrived early (sorry no photo of our friend, Joe, dressed in tuxedo pants, white pleated shirt, and cummerbund, in front of his grandchild-toting van.  iPhoto Faces feature let me down) and threw Larry off-stride, his list of checked boxes asunder. He is a methodical, steadfast man. This was an over-the-top wow moment. Cute (Joe’s averse to that adjective, so he’s teased. A lot.) 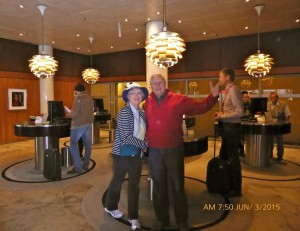 All was well, we had a marvelous two-and-a-half week vacation. Crystal clear skies and waters, pleasant people, and wondrous adventures. Great photos in a well-loved vacation.

Until we needed to alert that same Uber driver to a changed airplane arrival time. We had no phone…

The good news is that same camera coddler has a wicked quick memory and a beguiling smile. With both unconcealed weapons, she appropriated the tour manager’s phone and called Joe, our Uber driver…

Know this: Joe is seldom seated beside the home phone: he’s too busy running the budget committee of his church, coddling grand children, watching TV, working the computer, or taking a nap… And there was that time zone element to consider, which I could not.

Miracle: Joe answered the phone, the number I’d assiduously memorized. Though we were in Norway and he was in Mission Viejo, his voice was clear as a bell. We could ‘see’ his smile as he gleefully agreed to the altered pick-up time.

‘Life as a miracle’ occurs often for us in airport themes. Think that we travel a lot? You betcha!

Think God works miracles in our lives? You betcha! I think he wants us to travel, too. A lot!

Here’s a California airport-based miracle, a blast from the past among friends:

PS This occurred a year ago, and there was Viber then, as there is now. Also WhatsApp for free international calls.

But, hey, I am a Boomer. What did you expect? A miracle?