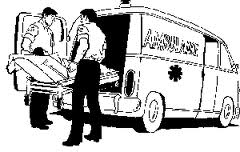 Yesterday I posted about Death and Taxes, the American inevitabilities. It was a scary day for a friend and her husband, which prompted thoughts of such a day in my life. Over 100 days have passed. With some emotional distance, perhaps I can write it out…it was taxing to confront death…

That scary day our adventures were way-laid when my husband’s Rose Parade was in a different conveyance – and to a different destination – than planned. His trip was in an ambulance to the San Antonio Community Hospital.

On December 30, 2012, we drove in a van of people returning from a float decorating barn to the Ontario hotel where the group was staying. So the baseline of panic was that we were not home (though in California, not in Canada). My husband was seated in front of me and he suddenly arched forward as if stabbed. “My back hurts,” he replied, when I asked what was wrong.

That was understandable. The vehicle was an International Harvester, a van that is no longer made. Making the huge tank-like vehicles was formerly a staple industry of Fort Wayne, Indiana, where many of my husband’s family members lived. The shock absorbers weren’t great…but my back didn’t hurt. We hadn’t performed strenuous work as we pushed hundreds of flower stems into the styrofoam float base for a couple of hours. Besides the ride was graciously provided by a volunteer who wouldn’t even allow us to contribute $$ for his tank of gas. A nice guy.

That my husband soon related that he was hot and stripped his jacket off was not surprising. He is a hot man in more ways than one. I thought I saw moisture on his upper lip. A nurse was seated next to him, but she didn’t stir. Perhaps I imagined it.

When we finally arrived at the hotel forty minutes later, we said hasty thanks and farewell to the other riders because my husband said he felt sick. As we stepped into the elevator, we deep breathed together. “Yoga breathes,” I said. “Yoga breathes.”

In the room he tried to rest while I hurried my phone to our friends’ room where she had a re-charger. Larry and I’d agreed that this was important because we’d forgotten our camera for Rose Parade pictures and would rely on the phone that had just taken a hundred pictures while decorating the float in the barn.

But her husband, to whom my husband had loaned his SUV for the day, was not there.This became another source of alarm, because when I returned to our room, my husband, who eschews medicine, said he wanted to go to a hospital, stating, “It might be indigestion because of the cold charcoal briquet-like burger that we shared for late lunch.” When I noted that my stomach was not doing flips after sharing that forlorn food, I wondered aloud if he was having a heart attack. “Maybe,” he said, “because I feel like I have an elephant sitting on my chest.”

We’d been on African safari recently and seen hundreds of the multi-ton beasts, so there was no doubt how that would feel. I tried to get a doctor referral from the hotel’s front desk clerk, but she could only direct me to an outpatient clinic “just down the street”. We were from out-of-town, so that description didn’t help – nor did we have a car. I ran to our friends’ room, up three floors of steps because the elevator didn’t work, nonplussed without my stalwart husband at the helm of the situation.

Thank goodness my husband’s friend had just returned with our car.

Then we made another mistake, one alluded to in another post: we relied on a phone GPS and the vaunted SIRI. Who knew that there were ten clinics, including a hospital with a name like it was in another state (see above), within a dozen miles of the hotel? We drove around a bit, trying to follow tiny-screened maps (auto nav systems won’t work when the car is in motion and our book of Thomas Brothers maps were for Orange County, not Riverside).

The first clinic was closed. Of course: it was Sunday.

When we finally arrived at a clinic filled with very ill folk and a disinterested clerk at the counter, the young man in hospital scrubs nearby said “We don’t handle that emergency here’ while he dialed 911. The compassionate wanna-be doc took vital signs and talked to us calmly until the EMTs arrived, so very Hollywood in looks and type, with a strong sense of command in posture and procedure. My husband’s blood pressure could have raised the roof, but the first whiff of nitro cleared his pain. He smiled. He was going to be all right.

Our friends drove us – a red caboose for Larry’s red ‘float’ – and I watched as he began to laugh at some jokes made by the competent team ministering to him in the ambulance. “Laughter is the best medicine”. Relief for a worried wife.

We arrived at San Antonio Hospital, which a later Internet search verified had been in existence for over 100 years. With the universal blessing of God-incidence, our closest relative called on Larry’s cell phone just as we arrived at the hospital. While he was not expecting the bad news, and it took a few moments to break through his excited chatter, he got the family prayer warriors engaged and tasked himself to call other family members. I could focus on my husband.

Though the EKG was somewhat irregular, the first blood test showed that there was no heart muscle damage. However, the doc said that two more test administrations were required, at 6-8 hour intervals, to assure that there’d been no heart attack.  Our friends drove back to the hotel for the evening’s celebrations and worked out a method to return Larry’s car to the hospital that night.

We waited in the small emergency room, where several gurneys with prone, anguished people lined the entry walls with numbers penciled on masking tape above them. That’s how crowded the place was – overflowing with afflicted people. We felt fortunate to have one of the semi-private screened areas, but we waited for six hours until there was a hospital room for my husband. Finally at 10:30 p.m. he gained a space – in a room with an seriously-ill man.

Then I blessed GPS, for I’d be able to drive twelve miles back to the hotel by myself. Leaving Larry in the hospital room, where all were aflurry, but not all about him, took every ounce of strength I had, every prayer I’d ever said with trust in God and docs.

While in the ER we’d witnessed a priest administering Last Rites to three people on those gurneys lining the walls. What a reminder to cherish life while you have it, before it floats away.