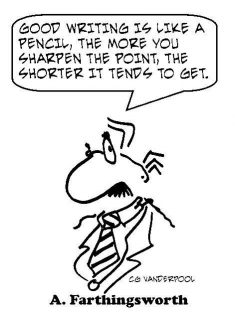 Popularized in novel and screenwriting guides in the ’90s, it’s been ascribed to William Faulkner, Oscar Wilde, Eudora Welty (now there’s a name worthy of a book character), G.K. Chesterton, “the great master Chekov,” and Stephen King, who wrote, “kill your darlings, kill your darlings, even when it breaks your egocentric little scribbler’s heart, kill your darlings.”

It seems that when advice is good, there’s a queue of claimants.

But the earliest known example of the phrase is not from any of these writers, but rather Arthur Quiller-Couch, a Cambridge prof, in a widely-reprinted 1914 lecture while railing against “extraneous Ornament”. As if writing was as easy as decorating a Christmas tree, which it isn’t.

I was reminded of this famed phrase in another context this week, still within the Book-a-Sphere:

Casey Anthony is reportedly shopping a book. Gasp! From pariah to profit – Shame!

And two movies have been made already of Casey’s case, with Caylee a footnote of history. Shame! It seems the phenom that I ranted about recently https://www.pjcolando.com/suite-snark-cynicism/ is at least five years old. On the nightly news last week, Road Rage incidents were reported to have increased 30% since 2010, and I experienced a mild episode the next day. Fright!

Casey Anthony, who became notorious in the Florida case that splayed across our lives from July 2008-11. Casey was found not guilty after repeatedly lying and misleading police and other flamboyantly heinous acts, of killing her two-year-old daughter, Caylee. Her defense team played offense and accused Casey’s father of stuff (an all-purpose word for things I don’t want to discuss). I refuse to copy-paste her picture here to add visual spice to this post.

The technical term for when a mother kills her child is “maternal filicide.” An estimated 200 women kill their children every year in the United States. I use the term “kill” rather than “murder,” because the latter has a legal meaning, and even mothers who deliberately kill their children often are found not guilty of murder by reason of insanity.

Throughout childhood, sons are more likely to be killed than are daughters. This fact has Biblical roots.

Yes, I performed extensive research for this blog post, yet another writerly tool: deferring writing a piece with Google search and research. Sometimes supplemented with Facebook or FaceTime, even flutter dusting about the house.

While this post has many writing points, let’s go back to the top for my confession:
I’d kill my darlings in my manuscript... if I knew what they were…

How do you distinguish the good from the bad, the uglier, and grandiose, Constant Reader?