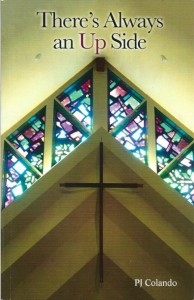 I’ve written before about the ultimate affirmation I received from my mother and my God. Sometimes, due to the control she wielded over the entire household – our schedule, our food, our feelings – Mother reigned as a god, the ultimate orchestrator of life as I knew it.

But Sunday School then and messages from the Holy Spirit now-and-then placed the ultimate authority in Him.

I gave a testimonial speech to raise funds at my church about the episodes of my mother and me in the early months of 2006. Further, I published that speech into a book to raise funds for a favorite charity. It was my privilege to witness. It was my privilege to receive. There were other affirmations, such as when she thanked me for holding her close during one of her emergency trips to the hospital later. I was present, important, and part of the process – and she knew it.

There’s always an UP side. Positivity, privileged to acknowledge, yes, that’s me. I’m also into equal time, something I craved as a child. I receive it now: I write.

On the one-year anniversary of my mother’s death, I felt my father shouldn’t be alone in the home they’d shared. It was daily subversion to his spirits to have to live there, but my sister who controlled his life had coddled him for a single day in her home and kicked him out, back to his lonesome home.

Further, she declined his entry into a very social living facility where he had many friends.

Don’t let me go there – my dad was trapped in forlorn circumstances due to another’s pride, akin to his treatment of his family…oh, well. 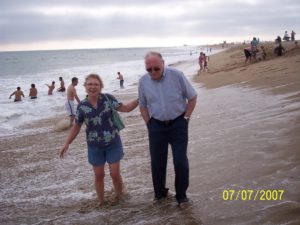 So, Dad came to visit us in California. We enjoyed simple things, plentiful nearby, together. Floral gardens, a WWII plane on local display, a ride in a friend’s new red Corvette, a walk at the beach. Slowly, appreciatively, we trekked.

Yet – because, we belatedly learned, his congestive heart failure hadn’t been diagnosed and treated, he became very ill. My husband swears an angel woke him in the wee hours and he went to check on my dad…who was gasping for air in our guest room.

Life as a Miracle exemplified again. My husband as hero, an honor he embraced. 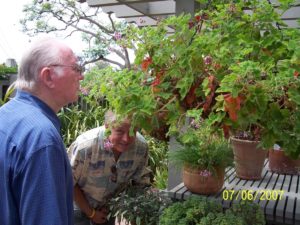 My father was hospitalized for a week and, because we shared a single car, my husband and I orchestrated a schedule for one of us to be with him nearly 24/7. We’d arise at 5:00 a.m., dress quickly, and Larry would drop me off at the hospital while he went to work out, as was his habit at his gym. He’d return with the car by 9:00 so I could work in my speech-language pathology practice, our only source of income. I worked for several hours, relieved Larry for lunch, then would return for afternoon clients.

My turn was the dinner hour and late into the evening. It was a treadmill of love.

My father was fully out-of-it for several days, in a danger zone medically. He had a faithful hospitalist I knew personally, a man who dedicated himself and a team of specialists to provide the best care. The nursing staff responded to our family team’s ever-presence, so Dad was nurtured fully. The hospital chaplain was sensational.

One morning mid-week when I awakened from my mini-nap in the two chairs pulled together at the foot of my father’s hospital bed, he pulled himself upright, looked me in the eye and said, “You’re the best daughter.” He smiled and plopped back to the pillows. 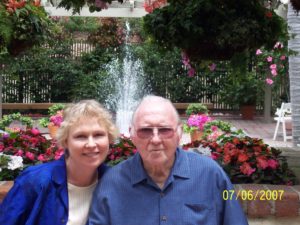