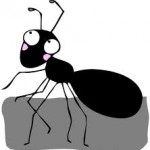 I wish the Pink Panther had come to mind, singing this jokular refrain. I wish his image had helped me laugh at the situation. But it didn’t. There was no joking this injustice away.

I’ve long been admonished that life isn’t fair, but I want it to be and work at my quest anyway. This was just another injustice. The personal pain was minimal; the angst was surreal.

I like ants. They work, they scurry, they earn. My kind of critters. My kind of pets. We have no others, except for the occasional spider or cricket. I dislike spiders and crickets, but ants are okay. I identify with critters who earn.

We’ve had few ants in our home of nearly 27 years, which is almost four times as long as I’ve lived anywhere else in my life. They’re industrious, transients seeking shelter, from rain usually. As a person who generally dislikes Weather, I’ve accepted their stance to come in out of cold and rain. Both are brief in a southern California winter.

But we had a few extended periods of weepy, seepy weather throughout December, so in came the ants. On a friend’s advice, we bought Borax and scattered it on the floor under the toe kick of our cabinets. It was near the same color as our limestone floors, so it was not unappealing. It was not in our way, only off-putting to ants.

All was well. For a few days. (that word ‘few’ appears a lot in this story, maybe I’ll go have a few sips after I post this story. Especially because I spied an ant, scrambling across my desktop.)

Then I opened the pantry to retrieve the multi-grain pancake mix requested by our house guests. Egads! The ants had fled the kitchen, but had invaded the pantry. Who knew that ants loved Kashi – or that my snacking hubby left the package open?

Four heavy-handed humans cleared the pantry and washed several shelves in no time at all. It was if the Mother was coming home and the Cat in the Hat was ascramble.

Lots of dead ants swirled down the garbage disposal with a water chaser. (maybe I’ll have a chaser, too. I know it’s early, but it’s my home. Of nearly 27 years.)

I cleared the Borax from the floor under the kitchen counters and swept it into the pantry, also sprinkling some on the front of the shelves. (a little trivia here: Ronald Reagan was the spokesperson for 20 Mule Team Borax, a product that was as difficult to find as a Reagan Republican after the recent election)

The ants have returned to the kitchen, scurrying over the counters in little bands, or as solitary sentries, for sweets. (did I mention that I’d made a lot of cookies and eaten one or two on those weepy, seepy days we’d had?) I refuse to mind them now. Their tribe is harmless in small numbers- and not feasting in the pantry.

No Pink Panther – or dead ants, either. Not now or ever.

Justice is an ideal. I am flesh and blood, and Industry loves company.