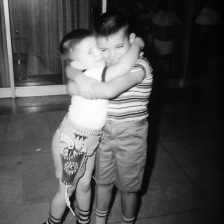 I am writing a sequel to my novel, Stashes. I miss my characters: Jackie and Steve Breeden, pictured to perfection on the cover by the illustrator, Cliff Cramp (yup, he of the Star Wars dvd covers’ fame).

I miss their life misadventures, and there was an open loop in the narrative that begged for the sequel. There was a character who wanted a turn.

The sequel novel title is Hashes & Bashes. It’s fiction, but real life. You get the drift–you are living life on this planet, too. Among Human Beings who hash and bash habitually, someone is going to get hit.

All characters have flaws, this we know, because we are they and they walk among us–but not even psychology texts agree on causes of the dilemma I’ll present, though the consequences are clear.

We have a female character; let’s call her Eve. She has two sons like the Biblical first woman, and like that woman, she favors one and not the other. One is blindly, openly vaunted, as if he were the Holy Grail of Human. The other is as slighted as she is able. It has been ever thus.

What would cause a mother to act so divisively, so derisive to one, when exalting the other? The shunned one, consigned to snippets of acknowledgement and affection like Cinderella, while the other was crowned King of the World, long before James Cameron cried out at the Oscars.

Survival of the fittest? Law of the Jungle? Fair is rare?

God as my witness, I don’t get it all the more because Eve claims to be Christian, a religion of love for One and all.

I read the article, intrigued, in part, because one of the scholars is from my college alma mater. I still don’t get it and postulate another cause: because the favored son reminds her of her spouse before responsibilities, reprisal, and irksome habits drove the couple apart… Back in the days when the duo was dating and raising a different kind of cain. Perhaps?

The scenario isn’t going to change, but perhaps I’ll understand with your insight. Whaddayathink? Is this character worthy of life in a book?

In the meantime, let’s watch an episode of a favorite childhood tv show, My Three Sons  https://www.youtube.com/watch?v=SgZ5MBjCy64

Diversion helps me constrain my mind and my mouth in the presence of unfairness that I can do nothing about. Don Quixote of fairness: that I am. What about you?