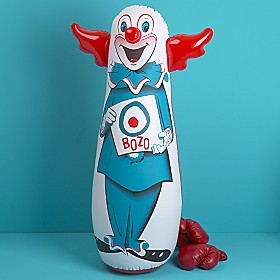 If you could choose a cartoon metaphor for yourself, who or what would you be? It’s a great conversation starter at a party – try it sometime!

A group of friends chose Charlie Brown for me. Whaddayathink?

You recall the hapless champion of real, who sought the tender attentions of the world, yet even his dog talked back and became as famous as he.

Probably because Snoopy could dance and whoopee…

Charlie Brown contended with a dastardly sister Lucy, who always pulled the football away just as he was about to kick for an extra point. Her offers were always rhetorical, laden with stunning contempt. She was not clandestine with her wide open, disrespectful mouth. She was a bully in plain sight.

Though he was hapless, Charlie Brown was never hopeless. He was everyman’s hero: he never gave up. He was Winston Churchill in cartoons.

A clownish personality tag suits me better than sad sack laments. I love the buoyant performance art of laughter.

I relate to Bozo the Clown, replicated on a standing plastic bop toy of four feet. Red hair flounced like angel wings, he even held his own target, like the one that is often placed on me.

Not Clarabell,  early television’s clown, who honked his horn and never spoke – I speak a lot and seldom honk my own horn – but the Bozo the Big Bopper, a punching bag for tykes, appropriated as therapy tool to siphon angry people’s Issues.

Yeah, the one who never lost his smile, nor his balance for long. The one who always bounced up right. I learned that technique – to be strong, smart, and bold, not matter what – because of a sister, my lifelong sniper/saboteur.

And, now I see the target differently, held by Bozo as a shield over his heart.

Back at you, slings and arrows targeted for my heart. They rebound as all karma does.