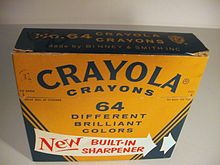 What do you recall from the first day of school?

What rite of passage pleased you most: your novelty lunchbox, new clothes, a fresh hair cut? What accompanied your catapult from carefree kinder and endless opportunities for mayhem?

What rite of passage piqued you on the hallowed day: your mother’s kiss to your forehead in front of your pals, a fist fight at the first recess, lunch money lost in a crack of the school bus seat, a torn shoelace?

Abundant Crayolas were the prized booty in my peer group: whose box would hold the most? One-upsmanship in multiples of eight, the number in the original box of Crayolas, which sold for a nickel in 1903. (halt: that’s not the year I started school!) The same colors populate the eight-count box today: 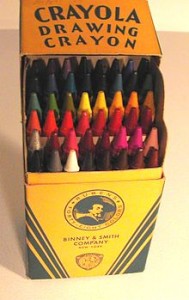 Although those with affluence had more color choices, it’s likely that the same colors wore down first: red and green, as we prepared cards and decorations for Christmas. Parity maintained by the mundanely tedious, just as each man, no matter how highfaluting, puts his pants on one leg at a time.

The average child in the U.S. will wear down 730 crayons by his/her 10th birthday, or 11.4 boxes of 64s, which is the number of Crayolas in a box when I left grade school for education’s upper echelons. That’s a box/year from spontaneous scribbler to sixth grade.

I still adore crafting and coloring. How about you?