By the time she’d made her way to Booth #1, Grace’s legs felt as if she’d slogged twenty-four miles. Her heart had met its test of endurance—so far.

“It’s a goldang mess,” Ferguson muttered to no one in particular, though Grace overheard his remark. There wasn’t a sound in the God-blessed diner, so she hoped that no one took the remark personally. What was happening here could be anywhere, but why did God choose to level Paradise?

It’s enough to make a person hate God. Grace stunned herself with that thought, wishing that she could stuff it into the thought shredder in her brain. A pencil clattered to the vinyl floor, as if in benediction.

Grace cantilevered to fetch the pencil. Its lead was broken so she nestled it behind an ear. She used the red one, which seemed appropriate for the occasion, as she rounded the room. She gathered twenty-two orders, avoiding Ferg and his rants, knowing that he’d keep cooking, no matter what. Besides, each was minimally disparate from the others. No one needed a menu because they knew it by heart.

Truthfully, what they’d like to order was not on the menu. What everyone, including her and Ferguson, wanted was a rewind of life to the days before the fire licked their plates clean, the days when Paradise was paradise.

Grace gimped back to the short-order counter, clipped all twenty-two orders on Ferguson’s ‘rounder’, and clanged the counter bell. “Folks all ordered the same, Ferg. Lots of pancakes and ham. I’ll make a kettle of oatmeal if we have some, ‘cause I think we’re gonna run out. I’ll fetch the boxes of dry cereal, too, though I doubt we got any milk.”

Ferg waved her off and Grace padded to the bathrooms. She peeked in, to police the place, but all seemed in order and the TP holders were full. It would be different by the end of the day, she suspected. There’s so much emotion—mostly despair—in the diner that it’s going to leak out of several orifices. She checked the wall dispenser of Kleenex. I must keep that full.

Grace sharpened both pencils, noting that the erasers were blown. Too many people changing their minds on orders, anxious to clip short on an order that they may never be able to repay. Anxiety showed in lost trains of thought, people’s minds a-jitter while their hearts hardly pumped.

Grace pawed through the supply room, found the big sack of oatmeal, hefted it, opened it and dumped it into the gigantic and beat-up aluminum pot that Ferg used for pasta. She’d already filled the pot with precious water.

Ferg sub-vocalized some kind of political tirade, his trademark, so Grace walked out of the slot kitchen to fetch the kid cereals. She knew he was flap-jacking his heart out and smacking the ham as if he were blistering an errant pig.

Grace filled the final coffee in the carafes into mugs, one for her and one for Ferg. There was no time for sugar and cream. She plunked the logoed mug on the counter but didn’t wait to see if Ferg noticed. The muttering fool was focused on pancakes and ham and politics.

She downed her coffee and slapped the mug on the counter. Empty. Then she made more coffee, glad there were two burners on the Bunn.

She did not make decaf.

Ferg’s diner sported a commercial kitchen built for two butts only and, the dishwasher hadn’t made it to work. Grace didn’t want to be one of the hustle-butts behind the scenes. She was neither the owner nor the cook, and Grace was fully aware that she was the only waitress on shift.

She couldn’t allow Ferg’s avoidance of engaging with calamity to zap her energy. He was a man on the march to feed millions, if need be. He’d get his task done.

But Grace could not avoid engagement. A full reservoir of fortitude was required to meet the needs of those who didn’t yet know the scope of their needs. Grace felt compelled to be the bright vision amidst the diner’s occupants.

Patience was her overlord and mandate today. She must be a walking preacher among the throng. A social worker, a confidant, a mollifier of understandably short-fused folks. She’d heard that tempers flamed when hearts sank.

Grace wished she’d won the lottery last week and had her payout to dispense. She wished she’d long ago purchased stock in Johnson & Johnson, so that she had all of the Band-Aids in the world at her disposal. To mend broken hearts, broken heads, broken dreams.

It might be that the multitude crowded into the diner had left their wallets and purses and piggy banks when they fled for their lives over pot-holed roads. Some say that the roads themselves were afire. Others reported the circle-backs, the frenzy, the sparks lashing at their vehicles. Pets left behind, with eyes that may be forever bugged. Folks in these parts were unused to anything that set a fast pace. They were not used to thinking of fire as foe.

None had ever experienced the weaponizing of the lush lone pine fuel that warmed their shanties and single-story shacks. Most of them heated their homes and cooked with lumber they’d personally felled. 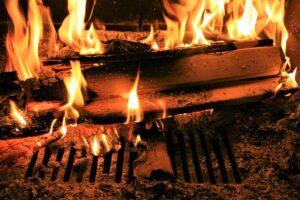 When confined in a fireplace, flames projected a nurturing and mesmerizing beauty that promised to lull you to sleep. Fire burned fast and crackled and popped, a melody of contentedness.

Now, Fire emerged aggressively, wrathful, and Armageddon-like. Fire as the wrath of the Apocalypse or a vengeful God.

Grace poured what coffee she could until the grounds ran out hours later. She listened and nodded, commiserated, and generated lists. She shared her cell phone so that people could contact loved ones in Elsewhere, USA. While this person and that person chatted excitedly, Grace wondered if her kin in Virginia watched the news and/or could stir herself away from Thanksgiving prep to call. It was often not the case and she’d long since given up expectation.

Grace dispensed smiles, ran to deliver meals and fallen flatware, and helped parents invent games to keep the children’s hope and attention spans intact. She ooh-aahed over the family pictures and precious albums of memories, what people universally elected to save.

One woman silently shined and re-shined her wedding rings while weeping and staring at her cell phone, as if willing her partner to call and tell her he was safe. While Grace empathized with the woman, she left her alone. A touch might engender a waterfall of tears. Best not to tamper with a fragile ego and heart.

Grace gimped but didn’t sniffle. What Band-Aids she had, from the stash in her bulky purse, she gave to the tykes, for their imaginary boo-boos. She gave three to the town vagrant who had helped to salvage another person’s car in exchange for a ride to shelter, as sort of a hero’s badge.Grace also gave the man pancakes and ham.