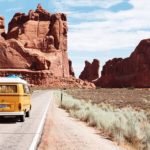 On this date fifty years ago, my New England parents put me in the car with two soldiers, recently returned from Viet Nam. The uniform inspired such trust. My worldly goods in one suitcase and a backpack, off we went. 2000 miles without speedy Interstates to ease the drive. With three drivers the trip took thirty hours. Stops only to refuel the vehicle and our bodies, and ‘to take a leak’. These were soldiers used to lengthy treks as ordered, so they had little sympathy for a girl’s anguish. Because I grew up with brothers, pride dictated that I be ‘one of the boys’ and not wet myself.

It’s a good thing that no bottled water wasn’t available – didn’t exist as a product – to exacerbate the need. It’s a bad thing there were no cells, to phone home. Brave be.

The group arrived in Fort Collins, CO at 3:00 a.m. The boys headed to bunk, somewhere, and I checked in – alone – to the Great Northern Hotel. The desk clerk squint-eyed a single, unescorted female with one bag, one pack, no purse. Scuffed tennies, no hooker heels…

At least I had luggage, not just a toothbrush in my jacket pocket like Dustin Hoffman sneaking up to see Mrs. Robinson. My outfit was likely bell bottom jeans, a long-sleeved tee, and a winter coat, so I was good there. My hair must of been wild without time for shampooing, even combing, after the fast-tracked road trip. While not having a means to phone my folks might have been worrisome, at least there was no cell camera to record my look for history. You invent your own image and we’ll leave it at that.

I’d already spent the cash stashed in my purse, so no means to pay. I’d been given a pack of blank checks from my father’s desk…but I didn’t know how to write a check (!) and credit cards were not yet ubiquitous. Not possible for a single, unmarried woman to have her own account. The dark days before Women’s Lib.

The next morning, the plucky cafe waitress served me coffee and hotcakes, bacon on the side on her tab. She sat and chatted for awhile and herded me to her apartment when she got off shift. She called her brother, who worked the chair lift at Vail. 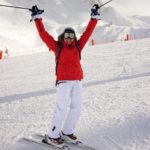 They were hiring, so somehow me and my bag arrived on the slopes. I’d skied the icy slopes of New England since I was a tyke, so the Vail powder was a swoosh. And, that my friends is how I became a skillful ski bum.

It’s about thriving to tell the tale.