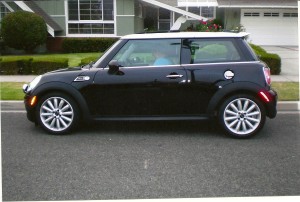 I was seated in my car, just a few minutes before 5:00 on a week day, stashing the dry cleaning receipt in the cup holder, so that I’d not forget to retrieve my clothes on the promise date. Suddenly, a car dashed into the parking space next to mine and, as the driver hastened out, his car door hit mine like the slap of a lover gone mad. Hurriedly he walked with a sheath of papers, in an outstretched arm  leading toward the small community bank like an Olympian aiming for a world record time.

He was oblivious of anything except his goal, let alone me sitting in my car, a silent witness to the whack. I got out, inspected my car’s side mirror with its new silver scar marring its special paint job, and said, “Excuse me, but your car door hit my car.”

He wheeled on me as an adversary, papers still clutched for emphasis, and began to assess my car as if he were an Avis Rental Car rep. Then he began to speak in a slick, smooth slither into blame-shifting. He pointed with a free finger, citing another blemish, loudly asserting that the silver sliver of paint was probably self-inflicted, too. The bank official who was apparently the planned recipient of his paperwork came out of the bank as an arm-folded witness. He amped up his case for the woman as if she were a judge…and I knew, so I asked, “Are you a lawyer?”

He had the temerity to pause, even flinch, but a confession stuck in his gullet, just as acknowledgment of his actions did, however unintended or inconsequential. Just a hint of shame and/or unrelinquished responsibility would have been a gift of appropriate adult behavior. A simple “I’m sorry” would have been nice.

It was so schoolyard bully, an apt apparition of my siblings’ collective behavior, that it still chills my spirit, a year later.

I recall how many of our country’s politicians are lawyers and how government seems paralyzed by unstatesmanlike behavior and the stifled air of irresponsibility. No wonder so little gets done for good. The buck stops nowhere. Bring Harry Truman back!