Cooperation, competition – which side of human nature’s divide do you stride?

I can’t forget it; it seems to be the pattern of my life. 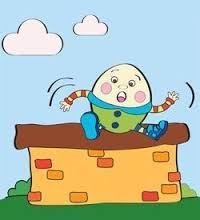 Co-opetition is an example of portmanteau, defined by the great linguist Humpty Dumpty as a term that has “two meanings packed up into one word.” May they make you chortle (chuckle + snort) if you don’t find them mimsy (miserable + flimsy).

Humpty Dumpty was a good egg, multi-talented and not scramble-brained. He liked word play as much as I do. Splencandidly better than great.

According to Wikipedia, the college kids’ ultimate source, the derivational history of co-optetion dates from1913, just over a hundred years ago, used by an entity called the Sealshipt Oyster System (you look it up, not I). More recently used by a Nascar man, who has out-paced many another driver, running high on the oval track, up against the wall.

In the mid-2000s, co-opetition began to be used by Darrell Waltrip to describe the phenomenon of drivers cooperating at various phases of a race at steeply banked, high speed tracks, such as Daytona and Talladaga, where cooperative aerodynamic drafting is critical to a driver’s ability to advance through the field. The ultimate goal for each driver, however, is to use the strategy to win.

And, of course, only one driver can. It’s apparent that boys play games, too.

In 2013 Compassion Games International, an activity of the Charter for Compassion, used coopetition to describe their annual games between cities about who can commit the most acts of kindness and compassion.

If that happened, walls would truly come tumbling down.

Be a good egg and practice Compassion instead of Bashin‘, my new refrain.