A Blast from the Past: The Skunk Scene 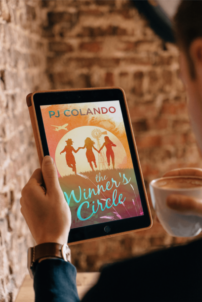 An hour later, Jackie finished packing her bags. Three suitcases and a plastic garment bag filled with her friend-of-the- bride gown and new full-length fur. She played with the zippers a few moments, feeling like a carefree, but quizzical kid. An adult about to go truant on an adventure extraordinaire.

The garage and kitchen freezers were full, pantry snacks stockpiled, and the farmer who cash-rented their land had brought in five-pound bags of popcorn. Her thirty-something son would not miss a meal. No one could challenge her Great Mother cred.

The utility bills were six months pre-paid, guaranteed by overdraft protection from one of Bonnie’s LLC accounts. Even their monthly tithe to the church benefitted from an over-generous donation on the entourage’s behalf. That much money ensured Fran and Paul’s lottery win silence, if not their bond with the Lord. The vetting of steeple builders had already begun.

All the potential loose ends tied as properly as feasible, sans fanfare and forget-me-nots. While she’d been incensed with the high school staff’s lapse of a decent send-off several years ago, when their travel had been a mere US gallivant, now she didn’t care. Fran had retired as principal, and half the personnel differed from their heydays. Let the high school children bring their own food or starve. Jackie had peeled enough potatoes to line the Equator.

The dog howled as if admonition for her snark. He howled and wailed and barked. What had gotten into that idiot dog? He should be with Steve. Was he pre-complaining about their departure?

She trundled down the stairs—it was time to prepare the last supper, anyway—massaging the banister with one hand. The action gave her the handle on events she didn’t feel she had. She winced as the familiar board on the third step creaked, an occurrence no matter which way she zigged or zagged.

Was that scratching on the back door? Damn that animal. She abbreviated her habitual kisses to each gilt-framed Brandon portrait in the stairwell, wondering if the dog would grow up any more than Brandon. Brandon wouldn’t consider repairing a damaged door, and Steve wouldn’t leave a tattered door behind.

Carl would defend the pup and then insist on helping with repairs. The Dalmatian pup restored him to Steve’s heart, so Carl idealized it. Jackie wondered why they’d never gotten around to properly naming him. They’d had him six months. Yelp, whimper, scratch-scratch. This was incomprehensible.

Why didn’t the dog enter via his special door? She half-ran past the entry and through the kitchen, at last arriving at the mudroom door. She attempted to cover her ears and jerk open the door simultaneously.

The dog squirted past her. He streaked toward the kitchen, followed a second later by a stench. Unmistakable, that odor. The dog had been skunked.

Jackie slammed the door and raced after him. The dog rounded the kitchen island, galloped through the house, and leapt over an ottoman into Steve’s chair. Dear God, not there!

Jackie grabbed an apron and tied it around her girth. She retrieved the vanilla food flavoring from the cooking supplies cupboard, soaked the bib and long strings of the apron, ready for the occasional inhale of the scent in case she forgot to mouth breathe.

Thus prepared, Jackie set out across the space, clicking her tongue soothingly, a sound she hoped would calm and lure the dog for capture. She drew closer, but as she got within an arm’s length of the still-whimpering pup, he bounded out of the chair and headed toward the bathroom just off the kitchen.

Jackie arrived at the bathroom in seconds and slammed the door. “Good dog!” she yelled before she ran to Steve’s computer where she Googled ‘How to de-skunk your dog.’ She was already dizzy and out of breath. A sit for research would do her good.

The Humane Society website’s No. 1 suggestion: Keep Fido Outside. Ha! As usual, the best solution was outside the parameters a farmwife was given.

No. 2 looked more promising. A mixture of peroxide, baking soda, and Dial dishwashing liquid while the animal was still wet.

Jackie smiled. She’d found a reason to appreciate Amy, Brandon’s former wife. The bad-ass chicka had been a fake blonde and had left behind a bottle of peroxide. Jackie knew exactly where it was. In the back of the pantry. She blessed her sweet mother’s advice to never purge anything.

Jackie sped to the barn to grab Steve’s neoprene gloves, thinking sadly that her favorite Spartan shirt would need to be burned. She quickly surveyed the area, knowing that, as usual, the men were scarce. She spotted a small, galvanized tub and appropriated it to mix the potion that would quell the stench.

Amazing Grace… Holy crap, even from the barn, Jackie could hear Bonnie’s ring tone, though it was stuffed in her purse. A shrill command, rather than a comfort, it made the calamity worse.

Thank goodness the distance back to the kitchen was short. Thank goodness the door was ajar, so she could enter easily with her hands full. Finally, the phone stopped ringing. A blessing because Jackie hadn’t time or inclination to hear whatever demand Bonnie was insisting upon now. Her dance card of chores was more than full.

Jackie shook her head to re-focus on her own agenda and to dismiss the inevitable bitchy voicemail from Bonnie. She assembled the ingredients, donned the gloves, and stuffed her hair up into one of Steve’s baseball caps. She snatched a couple of pairs of sunglasses, too. One for her and one for the dog. Might be a barrier to eye sting.

Wait! Jackie closed her eyes to recall the bold print item at the end of the article. Milk may be another way to treat your pet’s eyes and face. She drenched two kitchen towels with milk. She didn’t concern herself with economy. Plenty more milk where that came from in the milk barn. She wanted to do best by the dog and herself. Eyes were needed to obey.

Jackie took a deep breath, entered the bathroom quickly, tackled the animal, and blindfolded him with one of the milk- soaked towels. She placed the other towel atop the small sink counter, after a quick dab at her own eyes. Insurance. She edged through the door, picked up the galvanized tub, not caring if she sloshed.

Thank goodness the skunked mutt opted to hide in the shower tub, the normal bathing location. She hefted the galvanized tub to her hip, mouth breathed deep, and dumped the contents. The dog didn’t balk or bark or budge throughout. Glory be! Their discipline-challenged dog trusted her love. This would work out.

The dog hunkered down. Ashamed? Wish Brandon would absorb some of that sentiment. Would his hyper-huge ego ever abate?

Jackie drew a milk-soaked towel edge to her nose, treasuring the familiar scent, their income stream for six years, and now the savior of eyes. Refreshed, she bent over the sink to wash her own face and hair with shampoo, and then wriggled out of her clothes. In her hustle, she forgot to mouth-breathe and almost passed out.

Eyes closed, she fumbled for her damp towel and wrapped herself. She grabbed the mouthwash, unscrewed the safety cap with effort, and held it under her nose for several protracted yoga breaths. Pranah, purification, near-peace in a bottle. Her towel turban fell. Naked and mildly chilled, Jackie didn’t care. She lofted the mouthwash and chugged.

Jackie’s eyes widened. A reflexive glance in the mirror shocked her as much as the inadvertent shot of minty alcohol. Her disheveled image reminded her of Jack Nicholson’s look in the movie posters for ‘The Shining.’

She needed renewal, a soak in her tub, but that was upstairs, and Jackie knew she must deodorize their home. Before the aroma asphyxiated her and her family. Before an asthma attack hit. She snatched up her towel and wrapped it sung.

No longer longing to vaporize the dog, Jackie grabbed air freshener to spray throughout the house—with one hand firmly clamped on her damp towel shroud. She’d slammed the door on the dog, ignoring his whimpers for sympathy, glad that he had no words to explain. She didn’t want to hear it. She didn’t want to hate.

Jackie loaded her clothes and towels into the washer, knowing she might end up tossing them despite the power of detergent. God knew what could/would be done with Steve’s favorite chair. Goodwill wouldn’t take it. Even downtrodden people had noses.

She’d made it to the base of the stairs—she didn’t want to be The Naked Chef, even though she admired the man—when Bonnie slammed into her home.

“What the heck, Jackie? Were you born in a barn? You left the back door open! Is something wrong? I called about a half- hour ago and you didn’t answer your phone. Are you weirding out on me?”

Bonnie shouted her way through the mudroom and into the kitchen, then stopped. Her mouth was open wide enough to catch an army of flies. “What’s up, Jackie? Have you packed all you own?” Bonnie’s laughter was loud, and it hollowed Jackie to the core.

Feelings shifts as physical as a hot flash, Jackie bet. Bonnie already seemed oblivious to other people’s issues and needs.

A few moments later, Bonnie peered in, abashed. “I just figured it out, Jackie. The dog got skunked. I heard him whimpering in the shower—”

Jackie looked up quickly, alarmed. Bonnie smiled, placed her hand on Jackie’s forearm, and softened her voice, “I didn’t open the bathroom door.”

Jackie, swathed in a blanket, nodded. She ran a hand through her still-wet hair, now forming ringlets, and then massaged her wrinkled fingertips with her thumbs. Sobs pelted her lap.

Bonnie engulfed her in a hug. “I’m here. I’m here.” After a moment Bonnie leaned back and lifted Jackie’s chin. “That does it. The dog doesn’t go.”

She lifted a corner of her shirt to dab at her eyes. She attempted a grin to reshape the incident, but Bonnie’s reaction told her that it was a grimace. Jackie took a deep breath, let it out in a long sigh. “You don’t understand,” she wailed. She tugged at the blanket, which mildly toppled Bonnie, and then lifted her head to look Bonnie in the eye. “I don’t want to go.”

Bonnie held Jackie through a cry of several minutes. Neither had any experience with a departure of this magnitude, except for the death of their moms.

Bonnie spoke first. “This feels like the death of something.”

Jackie’s forehead creased…but she brought forth a cosmic quip. “Yeah, the trip is the death of housework. Now, I’m ready to go.”